Meet the woman behind the Isle of Wight Festival - Annie Horne

An Island girl from the age of two and lover of classic soul music, Annie Horne is now a multiple business owner and co-founder of the rejuvenated Isle of Wight Festival. She is deep rooted into the fabric of the Island’s tourism and thriving summer experience.

Annie began her journey in the hospitality industry. It wasn’t until later on in her career, during her time working for the Isle of Wight Council that the cogs began to turn and ideas put into motion for the Island’s largest ever entertainment resurrection – few people are aware that our Island’s revived pop festival was actually the initial brain child of Annie Horne.

“In 2001 the palace issued a statement saying they wanted communities in the UK for the golden jubilee in 2002 to celebrate things that had been great during the reign of the Queen.”

Thinking outside the box, Annie researched the reasons why previous attempts to resurrect the Island’s music phenomenon had failed. After some diligent examination of previous applications, the answer became clear.

“I looked in detail since 1970 until 2001, there had been seven applications to do a Festival again… They all failed at the same stage which was the first hearing of licencing.”

She went onto explain that the council around 2002 was in three parts, South-Wight, Medina and the Isle of Wight County Council. This meant approaching all three as well as various other groups such as the NHS and parish councils to gain their acceptance to her initial concept.

“I had to go and find someone to help me do it.” Enter; John Giddings. Annie explains that there was a lack of interest from music agents for the project. John was the only one to pay attention to her plea.

I’m sure we can all agree that it worked out quite well that one of the largest music agents in Europe found a new Isle of Wight Festival such an attractive idea.

Annie explains that the various authorities said that they weren’t comfortable with her creating a three-day event. But determined, she found a temporary solution to ease worried minds…

“I said okay let me do one big event, one day and prove to you we can do it safely and properly so that people still have a great time, but we’ll do an all-round the Island two-week event. “

This resulted in the first Isle of Wight Festival in thirty-two years, 240 events in 112 venues across the Island culminating in a large event with The Charlatans and Robert Plant playing Saturday 3rd June 2002.

Annie Horne has been one of the many hard working individuals on the Isle of Wight Festival site each year since, although she is taking a step back this year and only running Hospitality, Main Stage VIP and Big Top VIP and The Speakers Corner programme, with only about 60 staff instead of 600!

Annie is also the proprietor of the popular Black Sheep Bar in Ryde. This venue was opened in 2008 by Annie, over the years it has seen faces such as Magic Numbers, James Walsh, Glen Matlock, Rob Da Bank and most recently Deekline in the club lounge (downstairs).

“Magic numbers were amazing; people were so astounded to come and see them in a venue that had 150 capacity.”

The conversation turns to the Island’s lack of large music venues, an area that Annie is passionate about. The commonly brought up topic of reopening Ryde Theatre…

With some of the bands you would like to bring, a 150-capacity venue is nowhere near enough to get a return on investment. As you probably know I’m into trying to re-open Ryde Theatre, which is a very exciting project. To have a 650-700 venue that is so flexible. With the plans that are intended for it at the moment; it’s in with planning and the owners have been looking at alternative options to make sure the space is really flexible.”

She informs me that there are “No definites other than the desire to open it as a live music venue.”

Despite being so heavily knitted into the music and event community, Annie still finds time to enjoy some of the other summer events on the Island.

“I love Rhythmtree, it’s that little bit different. From the outside looking in its very family orientated, world music but it has that feeling of an early Glastonbury and I really like the look and feel of it.”

Favourite place on the Island: Walking along Ryde seafront to Appley Beach 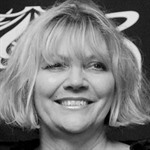