Becoming Isle of Wight cheesemakers at Briddlesford Lodge Farm was probably not something that Izzy Griffin and Debi Pidgeon had envisioned in their former careers, but they have embraced their new vocation with passion and pride.

Izzy was a PE teacher in Isle of Wight schools and Debbie had been an administrator at the local St Mary’s hospital, although she had a background in catering, when they were called to cheesemaking by developments at Izzy’s family farm. Izzy’s brother, Paul Griffin, was building a brand-new dairy to pasteurise the milk from the farm’s award-winning herd of Guernsey cows. But what would they do if there was a surplus of milk?

“If you’ve got your own herd of cows and our own dairy, there’s a very small chance that you’ll sell all of your milk,” explained Paul. “You have to put your surplus into milk products that have a longer shelf life”.

Although the farm already has award-winning cream – it won the Cream of Creams and the Gold Award at the International Dairy Awards 2017 – and lovely creamy butter, an Isle of Wight cheese was the obvious answer. Izzy and Debbie first learnt the art of cheesemaking at The School of Artisan Food on the Welbeck Estate in Nottinghamshire, one of the best food schools in the country. Welbeck has an outstanding reputation; its quality of training and courses are taught by some of the most skilled and experienced artisan producers and practitioners in the business. Izzy and Debbie were taught by experienced cheesemaker Paul Thomas, who has been very complimentary about all their cheeses when visiting the farm.

The couple now produce five different cheeses from the Cheese Room at Briddlesford Dairy, which was completed in July 2017: Cheddar, Gouda and Caerphilly, along with Halloumi and Feta style cheeses. The latter two are made with cow’s milk rather than sheep or goat milk, hence the addition of ‘style’, but they are hardly distinguishable from the original and if anything, they are tastier – it’s that lovely creamy Guernsey milk.

“We were told that we couldn’t make certain cheeses with Guernsey milk. It’s quite nice when someone says something that you prove them wrong”, laughed Debbie. “But our cheeses won’t be like standard ones – they’ll always have a creamier taste”.

“Debbie’s the brains behind it”, said Izzy. “She has the background in catering. I was a PE teacher and I tend to go off piste! But there is a lot of maths involved in cheesemaking, and I did used to teach maths”, she laughed. Milk from the dairy is pumped straight into the Cheese Room, where it is heated, rennet is added and then it’s cut and put into moulds. They use vegetable rennet, so all the cheeses are also vegetarian.

After being taken out of the moulds, the hard cheeses sit in the maturing room on seasoned pine shelves made from trees felled on the farm. Some are given a semi-permeable covering in which to pick up an attractive mould as they slowly mature. Others, especially the Gouda, are encased in colourful wax. When ready, they are sliced and packaged for sale with every cheese being tasted for quality.

The feta and halloumi cheeses have a shorter shelf life, but they also fly off the shelves – halloumi made from the morning’s milking can be bought in the farm shop the same afternoon. Already the halloumi cheese has won an award at the International Cheese and Dairy Awards last year (2017) in Nantwich. 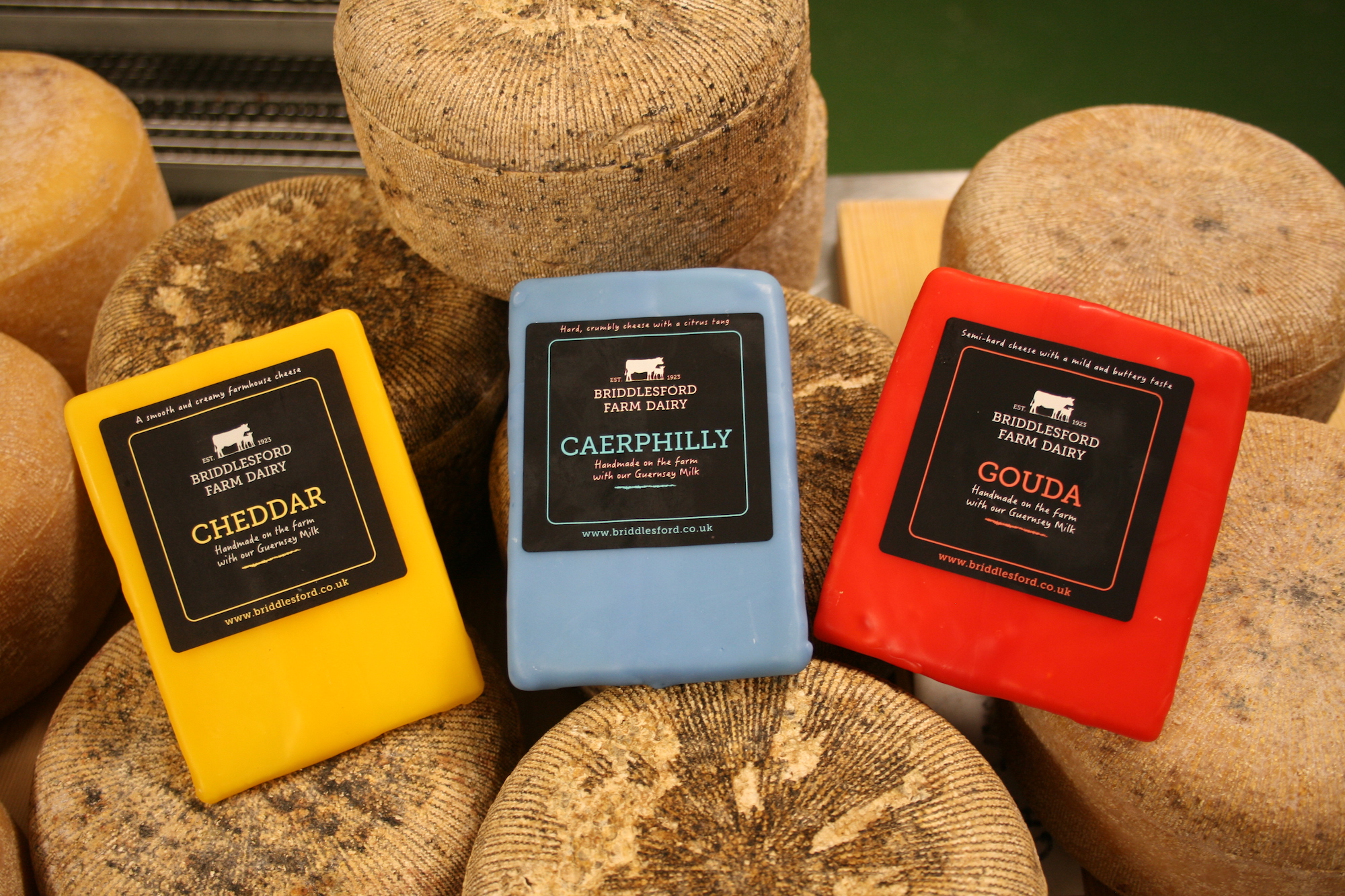 All the cheeses are, of course, sold in Briddlesford Lodge Farm Shop, but are also available at various good local shops around the island, plus Asda and Co Op stores. Whilst they are an artisan product, they’re not sold at hugely inflated artisan prices.

The cheeses are also on the menu in Briddlesford Lodge Farm’s Bluebell Café, as an ingredient in many of the dishes. If there’s cheese in a dish it’s been made less than 500 yards from where you’re sitting. Café Isola in Newport and Quay Arts use the delectable Isle of Wight cheese in their dishes too.

This is just the latest offering from a working dairy farm that has reinvented itself as a tourist attraction and is constantly improving and growing. Children can take a tour of the farm on ‘Welly Wednesdays’ throughout the school holidays, you can pet the dairy calves in their pens next to the café, see and hear the history of the Griffin family at Briddlesford Lodge Farm in the Hop Kiln Heritage Centre, and buy the farm’s lovely milk, cream and cheeses in the farm shop. You can even stay for B&B in the traditional farmhouse. Briddlesford Lodge Farm is more than simply an Isle of Wight cheese company, why not come and check it out for yourself?