It’s that time of year again when the Island is filled with the sound of buzzing two-stroke scooters as the Mods descend once again for their annual scooter rally from 23-26th of August, with the ride-out on Sunday 26th 2018.

It’s an event that is personal to me, because my mum was once a mod, and I have some beautiful black and white photos of her sporting long dark hair, big brown eyes and a long Parker coat as she sits on the back of her mod boyfriend’s scooter, having been on a drive down to the South coast for a punch-up with some rockers. In fact, she did see some of the large fights that kicked-off between mods and rockers, but never got involved, nor did her boyfriend. As usual with these stories they were part fact, mostly fiction and over the years have been blown out of proportion, which unfortunately tarred all the mods with a bad reputation.

Nowadays the scooter rallies are a much more sedate affair with much drinking and merriment at mod-inspired scar bands, camping under the stars, and of course the popular ride-outs that see thousands of brightly coloured, mirror bespeckled scooters buzz around the island in droves, their riders happily waving at Islanders and tourists who line the side of the roads. 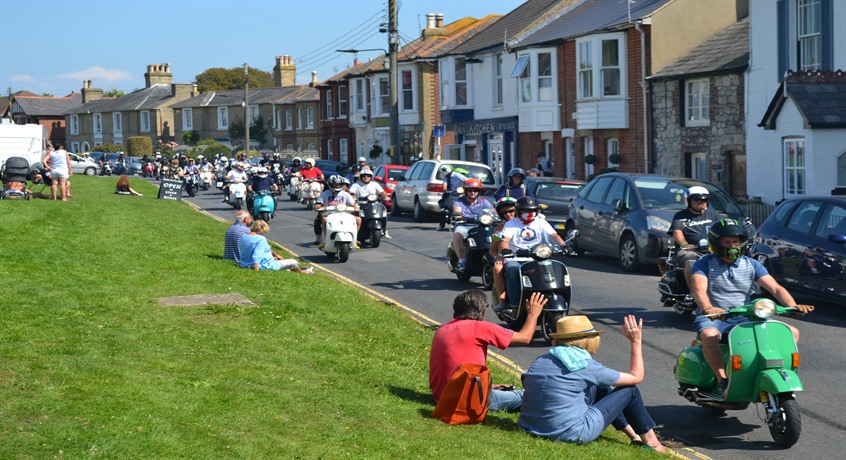 Strangely, official details of the scooter ride-out are always very elusive online until closer to the event, but it basically starts around 12ish from Ryde, which is one of the places to watch them, and then they literally scoot in droves around the Island through various towns. My preferred place to watch the ‘scooterists’ (a combination of old ex-mods and a new generation of Lambretta fans) is sitting on St Helen’s green, because you can enjoy it while having a picnic without too many people or massive crowds getting in the way. And if you cannot stand the smell of exhaust fumes the air is just generally clearer, although I would advise you bring ear defenders if you cannot stand the buzzing sounds of the engines, which can get a bit irksome after a few hours of waving at riders passing.

I think if you are holidaying on the Island while the Mods are in town it’s well worth stopping to watch them because the site of thousands of scooters is a fantastic spectacle. The kids will love spotting all the different ones and it’s fun to wave at the riders as they pass. So, what are you waiting for, go get your Parker on and join the ride-out.