I’m not an especially horsey person, but I have got more interested in them over the past few years, mainly because my daughter, ‘Regan Reverb’ as you know her on here, has one of these four-legged money pits. So we were pretty excited to hear about the coming of Osborne Horse Trials to the grounds of Queen Victoria’s old summer palace this year. She more than me, I have to say, but the idea of being able to watch top class dressage, jumping and cross country riding from the terraces of Osborne House was growing on me.

And by the time Wednesday July 25th came around we were both champing at the bit (sorry) to see the spectacle, especially as there were some really huge names in the world of horse riding coming to our fair isle: Andrew Hoy, Austin O’Connor, Oliver Townend, Emily King and Elisabeth Halliday-Sharp being just five of them. 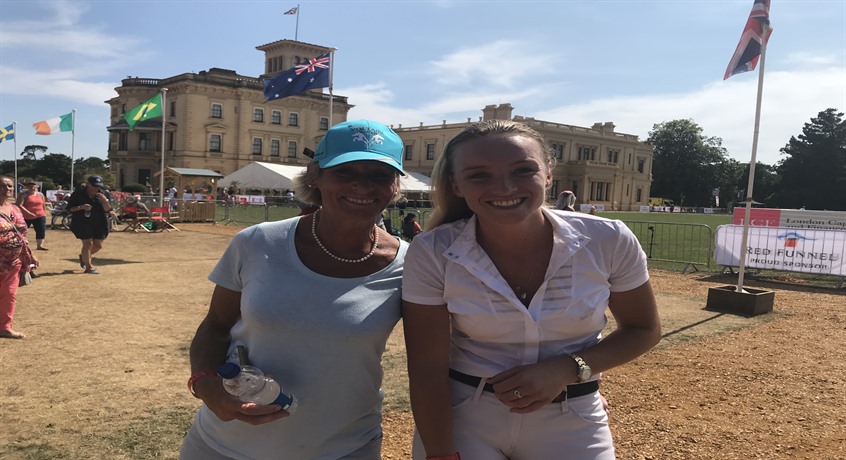 It was one of the hottest days of the year. I mean sweat running down your back hot. We pitched up at the dressage ring on the Durbar Lawn and there was no shade – not a single bit. There were some pink chairs though – I think they belonged to one of the sponsors and they were under a small pink stretch marquee a little way away that served as a little bit of shade. I appropriated one to watch the dressage and it was much appreciated.

The VIP tent had shade of course. We dropped in there for a bit, but the best shots were to be had ringside by the judges. And we had a new camera – so I hope you like these. 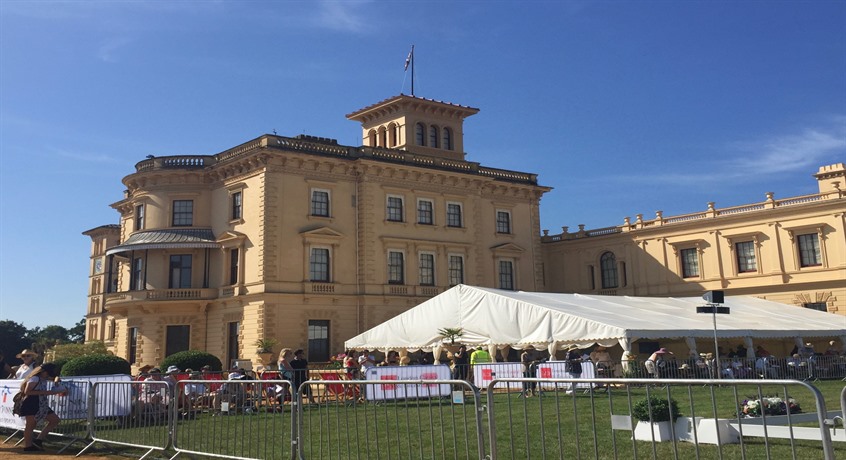 I’m afraid I can’t give you a commentary on the dressage, but I can say it looked better than the only other dressage that I’ve seen, in the dressage rings of the Isle of Wight. Almost like the dressage I’ve seen on the television.

Everyone had made an effort to dress up and look splendid, not just the horses and riders. I cast my eye around and imagined we were at Badminton Horse Trials. I reckon we could have been. Osborne House made a fabulous backdrop to the event. 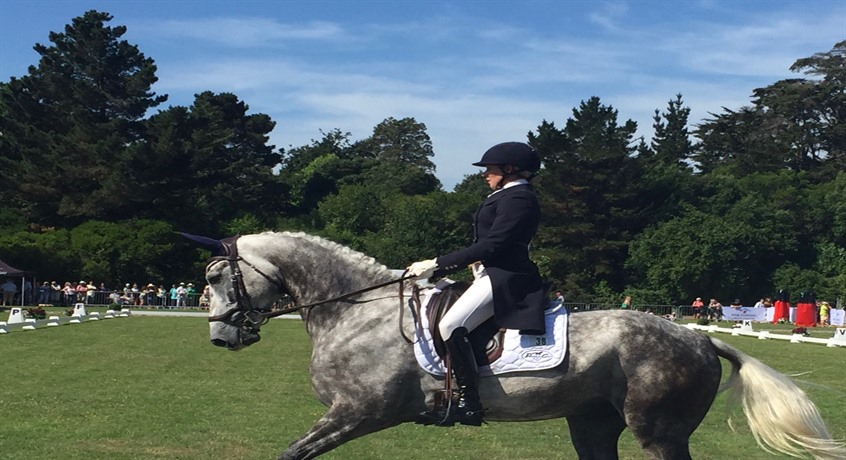 After the dressage was the show jumping, which always worries me – what if they catch a leg or injure themselves, or a rider falls off. One horse lost a shoe, catching it on the edge of a fence. It flew across the ring, luckily not as far as the spectators.

Next was a 17th Century Classic Dressage Demonstration from a master and his apprentice, both in traditional dress. Our Garlic King, Mr Colin Boswell, did the commentary and these riders and horses were exceptional. I wondered if Queen Victoria ever saw such horsemanship here on her front lawn? 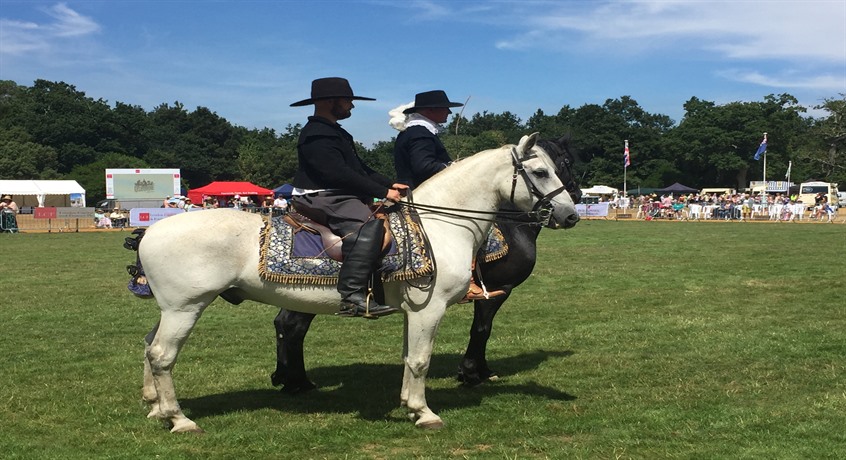 We then discovered that London Capital and Financial were offering free pink gin cocktails on the terraces in exchange for our email addresses. I was sweltering by this point and one of the girls on the gate to the LCF terrace gave me a baseball cap, which was remarkably kind of her. Regan had a pink gin and I had a lovely cold bottle of water. I still haven’t had an email from the finance company. 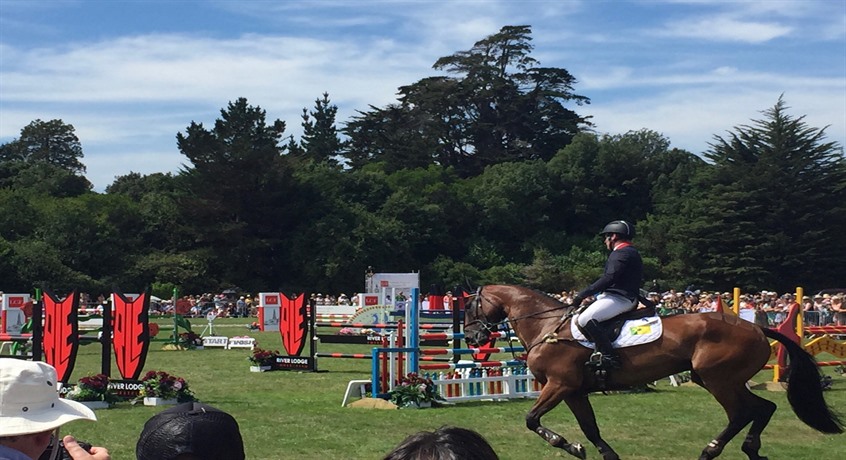 After lunch, it was the cross country, which zig-zagged across the grounds that stretch down toward the bay from Osborne House. The grass was yellow, with a slight brown tinge, as we’d had no rain for weeks and the fences had all been sponsored, many by local businesses, and had strange names. I took up a vantage point by a topiary bay tree that had just enough shade for me, quite near to Queen Victoria’s Table – a rather unforgiving-looking fence right outside the house. I brought with me one of those aforementioned pink director’s chairs, which was perfect.

My daughter ran from jump to jump getting loads of photos and short pieces of film. She’s now decided that she’d really love to do horse event photography for her career, if anyone out there is looking for a horsewoman with an excellent eye for shooting horses – with a camera you understand – she’s the one.

I could see quite a bit of the cross country from where I was sitting, and I got a few shots of the horses jumping Queen Victoria’s Table – thankfully they all made it – and then they thundered past me on the way up to the final fence. Such power in them!

And I found that I was in exactly the right spot to see the winners being presented with their prizes. I do hope this fabulous event will be returning next year. I certainly will be if it does – with a parasol and a large icebox. 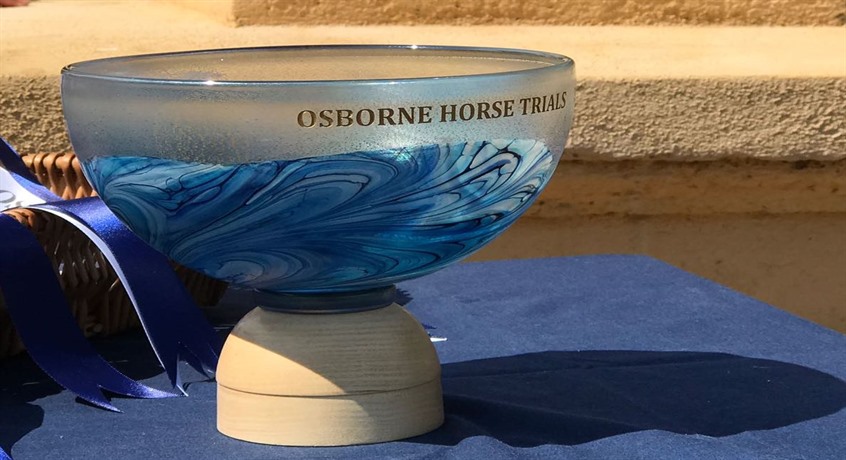 3rd - Andrew Hoy (AUS) on his own Cheeky Calimbo

3rd - Ludwig Svennerstal (SWE) on his own Fit for Fun RAA