The Lady does Pride

We had the most wonderful Pride event here recently. The Isle of Wight only had an inaugural one last year and then got picked to host UK Pride. It was amazing, and magical and very OUT THERE.

I’d just purchased a new (2nd hand) camera, so it was the ideal opportunity to try it out. And try it out I did. These are just a selection of more than 700 photographs that I took on the day.

Everyone assembled on Ryde School playing fields and this was the ideal photo opportunity. It was getting on for noon and it was HOT. Lining up to leave on the parade was even hotter. I was with the Moonshine Border Morris at this point, as my daughter dances with them. They looked amazing – as did everyone. It was so exciting, being part of the waiting and the anticipation.

And then we were off. I photographed the Moonshine as they danced their way along Queen’s Road – appropriate no? We were not far behind a huge float that had been made, very cleverly, to look like a hovercraft. And who was that on board, dressed in a red leotard? Yes it was Conchita! We all got much more excited at this point.

I got a few shots of the people on the hover, including Conchita, but the sun was not kind at this point.  Plus I had the wrong lens on. I changed it before getting to the bottom of Union Street and got this beautiful shot of Conchita waving and smiling. 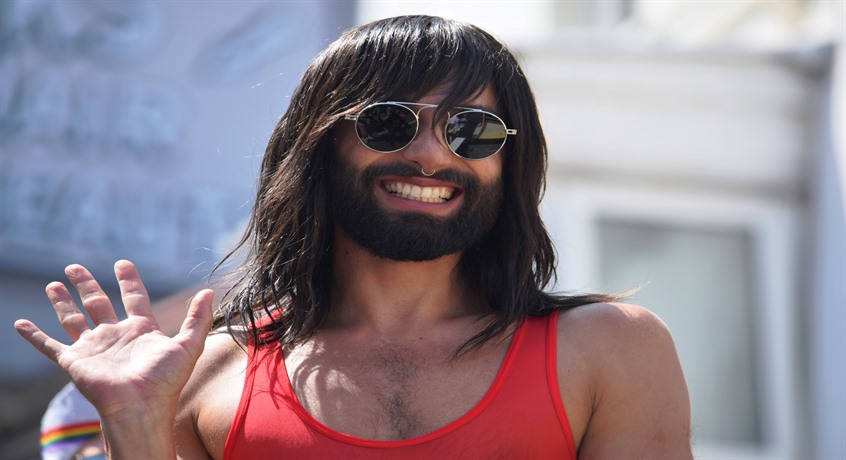 I got loads of shots of the parade as it came down Union Street. EVERYONE was there darlings, from the police and a gay sailing group to the governor of HMP Isle of Wight. There were unions, the Labour Party, a gay rugby team, a comic con entry with several multi coloured Darth Vaders who must have been boiling inside those suits. I was pleased to see a small band of ‘Christians at Pride’

All this plus Samba bands and Joseph in his Amazing Multi Coloured Rainbow Cloak, a group advertising Eclectica at Robin Hill in a most spectacular style, belly dancers, the Trans Queen of Pride, a bare chested man in a tutu who was running around all over the place and Ryde army cadets – one or two of whom were hiding behind their jellyfish umbrellas. It was HUGE.

Down onto the seafront and I headed for the Esplanade Hotel to pick up my press pass and sit down with a cold drink. The huge rainbow flag that reached from the top of Union St to the bottom had reached the hotel by this time. A few performers were gathering by the entrance and I met Jody Topp the Paloma Faith impersonator as she was warming up – she posed for me in her rainbow sequin dress. 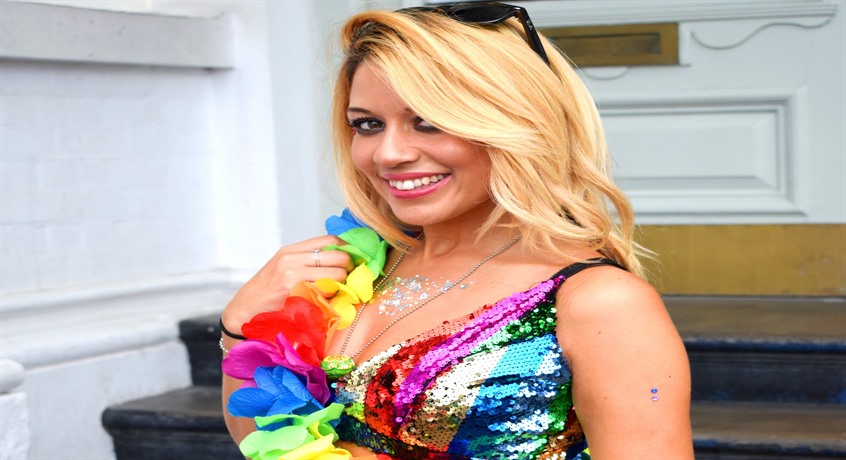 Down at the main stage things were getting underway, and I got a comfy chair for the duration next to two blond lesbians from Southampton, getting into their beer and banana cake, the latter from the WI tent further up the beach. They shared it with me and it was delicious.

Luckily I caught the end of Paloma/Jody, who was fabulous, dressed by this time in silver trouser suit with matching bra top. Miss Jason was very naughty. She kept saying that she couldn’t swear, but then flirted with the audience in a most suggestive fashion. Next up was Kelly O’Brien as Dolly Parton in blue spangly dress – great voice and an amusing duet with handsome audience member. Charlie Hides from Ru Paul’s Drag Race favoured blue hair, as she often does, with a cartoon covered dress and huge eyes encrusted with sparkly diamond tears – she was superb.

Danny Beard was quite extraordinary with grey leotard over black tights, clinched in with a Moschino belt and the most amazing contoured make up with glitter beard. You couldn’t take your eyes off of him – and his voice was beautiful. Finishing up his set dressed in a rainbow net jacket that made him look as if he had rainbow wings. Donna Marie as Lady Gaga was good too – in silver leotard, she finished her set adorned in an exploding bra that had fireworks on the tips. 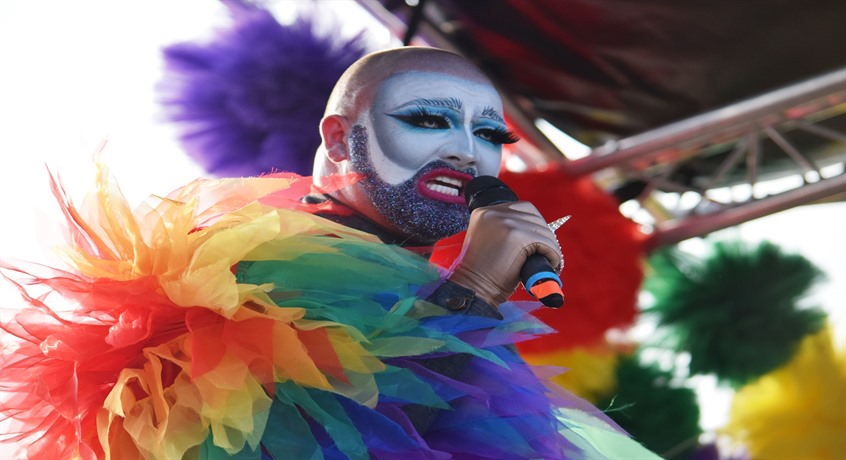 At this point I went off to try and charge my phone. This was a big mistake, as I missed Allan Jay, but I did meet him later. Lovely Scottish lad, with a face to die for – my friend thought he was Adam Lambert from Queen, which I think he took as a complement.

And then it was the star act Conchita, bear chested and slightly hirsute in a black sequin jacket, matching stretch pants, a few tattoos and nose ring. This was Conchita as a man – the pronoun changed, that’s how I knew. But he is a beautiful man, and what a voice he has! Leading in with Rise Like A Phoenix, the song that won Eurovision in 2014, we were dazzled by this young man in black who was on a mission to promote Europride in his home country of Austria next year.

Then Gok Wan took to the decks. He was looking very natty in a turquoise brocade jacket, but sadly I didn’t get a shot of him.

We wandered back to my car, meeting Allan and then Miss Terri on the way, wandering past people dressed in glitter and rainbows, dancing in the street and on tables. It was all so bohemian and celebratory and fun. I absolutely loved it – roll on Pride 2019!