I took my daughter to a fabulous event organised by Wild About Wight and Arc the other day called Rockpool Magic. The location was the fabulous Bembridge Ledge, located at the eastern-most point of the Island at Bembridge Foreland. The Ledge is a rocky outcrop that is only revealed at low tide that extends out around as far as the slipway ramp down from Bembridge Lifeboat’s Offshore boathouse.

When my daughter and I arrived there were hundreds of families and children searching the Ledge all holding buckets and spades. The organisers had set up an area with various buckets and bowls full of finds that the families had brought over to help identify.

My daughter and I go rock pooling a lot around the Island, but we’d honestly never seen such a fascinating variety of sealife, from various species of crab, including the famous Bembridge edible crab, to the biggest shrimps. We saw brittle stars and anemones (no, I can’t say it either without going all Nemo), but my daughter was totally blown away when she spotted a hand-sized rockpool fish called a goby, which we were told could easily be identified from its split dorsal fin. We had found these fish before although they had been little tiddlers. She was desperate to catch a big one. I was worried we’d need a bigger boat!

Soon my daughter and I were off exploring our own little spot on the Ledge, carefully stepping on the slippery rocks and fields of wrack until we found ourselves wading into one of the larger pools as a storm brewed in the distance and lighting streaked down from the sky. It was quite truly awesome seeing the incredible plant life in the water from the undulating seagrass to the colourful sponges. 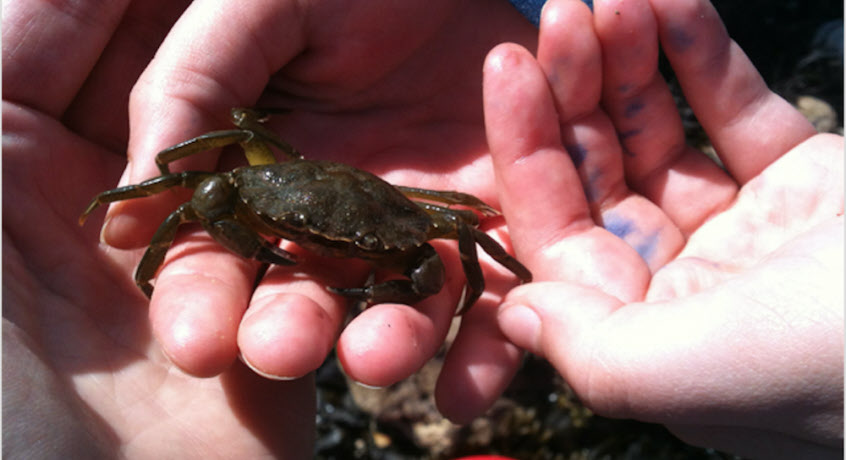 My daughter sweeped her net about the pool, trying to catch a big fish, but they just kept getting away. And then, rain brought our adventure to a premature end, but we were rewarded with a beautiful rainbow spanning the Solent. As we ran to the car, I promised her we would be back to find that elusive big goby. Another wonderful beach adventure on the Island.

Bembridge Ledge can be accessed from various places along the beach, but I prefer to park in the carpark found in Fisherman’s Walk, at the end of Lane End Road. You know you’ve found it because you’ll see the RNLI lifeboat station.

Before you go, it’s important to check the weather and tide times.

Top tips are to be aware of when it is high tide and look around to notice how the water is coming in, because the tide can turn quite quickly and small pools can soon fill up with water. Wear some good waterproof shoes or wellies as it can be rough on some of the rocks and can be very slippery on the wrack and seaweed. If you find things in rock pools please return them to the pool after you have looked at them. Leave everything as you find it, and take only photos. Oh and bring a beach spotter guide so you can identify your finds.