It’s not often that this lady is lost for words, but I’m weighing up the pros and cons of what I am about to share with you today.

You see I overheard a conversation between John Giddings, the IW Festival boss, and Ray Foulk, the man who with his brothers and others brought the original 1968, 1969 and 1970 festivals to the Isle of Wight, and I think you’ll be interested to hear what was said.

But the conversation was part of a documentary being filmed by the BBC that is being aired on August Bank Holiday, the weekend of the original festivals. So do I give away what is going to be quite a crucial part of that programme?

Or do I just stick to what I spoke to Ray about, just before he spoke to John?

Okay, let’s start at the beginning. I was in the press tent, head on the table, charging my phone and trying to get a power nap in, when a great flurry of unplugging and camera grabbing woke me from my reverie. So I unplugged my phone and wandered out after them, to find that they’d all disappeared – probably round the back of the tent to the backstage area.

But who did I spy in front of me but Ray Foulk, the organiser of the 1968, 69 and 1970 pop festivals as I previously explained. He’s a lovely man. I decided to wander over and chat to him instead of trying to find the cause of the melee.

Ray got up – he was sitting with a very nice woman who runs the International Times, who he introduced as it happens – and spoke to me at length. I didn’t know that the IT had been re-launched so that was interesting. I shall be in touch.

Ray was “wired for sound” he warned me before we started talking, and was waiting to be filmed. More on that later… 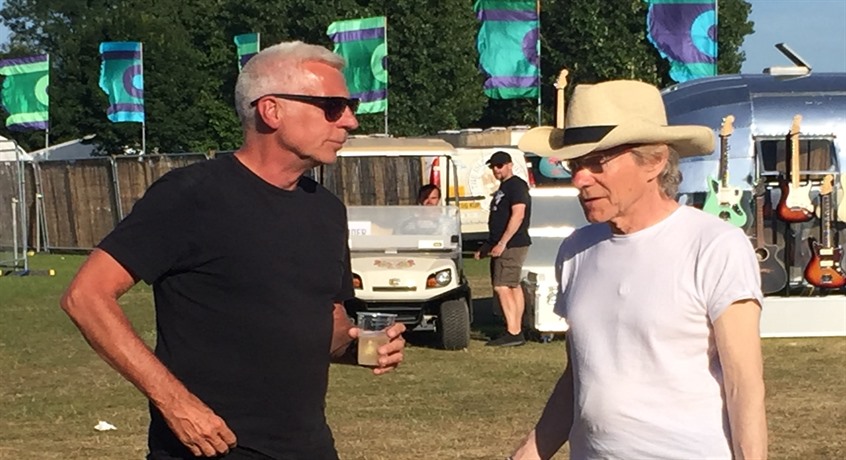 Anyway I told Ray that I’d recently interviewed John Giddings and that he’d been very complementary about him, saying of Ray “He’s got an open invitation any time. I mean without him there would never be an Isle of Wight Festival so he’s like guest of honour. He’s a great chap.”

Ray was clearly pleased. We chewed the fat a bit and I mentioned that I’d asked John about the two more 50thanniversaries coming up and that he’d laughed, loudly. But I was especially interested in next year, which will be the 50thanniversary of Bob Dylan playing at Wootton instead of Woodstock.

Did Ray think he might come? Well it seems that there are a few reasons why Bob might not want to, least of all being the fact that they had lured him to the Island in 1969 by promising to show him Tennyson’s former home Farrringford, as he’s a big Tennyson fan, and then were not able to come up with the goods.

“But it’s been put back just as it was when Tennyson lived there and there are rooms that can be stayed in on the top floor I think,” said I. Ray weighed this up and said that there had also been the bad press…

“The Rolling Stone said it was s*** in the first sentence of their review and then 18 Rolling Stone journalists trashed it,” Ray recalled sadly.

“But since then a re-mastered version of the Isle of Wight concert was included in a box set and that was well received,” he added.

Then we discussed how good Dylan had been in recent concerts – Ray saw him at the Albert Hall last year and declared his performance to be brilliant.

“He’d want a decent amount of money,” added Ray describing Dylan with that quaint hippy term as a “bread head.”

“Well maybe we could entice him here again,” I added, wheels turning in my mind.

Ray is in contact with Bob’s people, it seems, especially in connection with his recent books about organising the early festivals, ‘Stealing Dylan from Woodstock’ and ‘The Last Great Event’. The latter event was probably the largest ever gathering of people in the entire world and it happened here – on the Isle of Wight. We are quite proud of that. 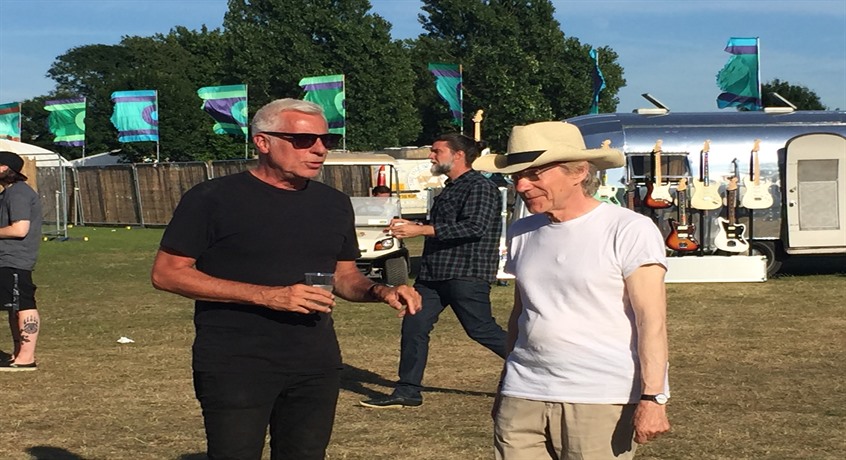 The BBC crew appeared from behind us and led Ray into the middle of the field, leaving him there looking slightly bemused for a few minutes whilst they waited for…

John Giddings, who bounded over, and proceeded to speak to Ray on camera about… well what do you think? We’d just been discussing Bob Dylan, so he was naturally the topic of the conversation.

What was said? Well this is the bit where I have to be very careful. Because I don’t want to jeopardise any delicate negotiations and I’d love to see the The Bard play at the IW Festival and wouldn’t want to jinx it.

So I suggest you watch the BBC programme on August Bank Holiday to hear what was said. And I would strongly suggest that you buy a ticket for next year’s IW Festival. Because you just never know…