Finding a Waterfall at Luccombe

Luccombe Beach is a lovely walk on a sunny day, but you do have to be mindful of the tide, which has to be low when you make your walk, or you’ll get cut off. The steps down to the beach fell down some time ago, so there is no access up from the beach when you get there, and you have to have time to get back.

We set off from Shanklin Beach, at the Chine end, where the Fisherman’s Cottage pub stands on the beach – a good place to return to for lunch or tea, depending on the time of year. Once a bath house for those who came to the seaside to take the waters, and to bathe in them privately, the pub is shut in the winter months, but there are plenty of pubs and cafes along the seafront.

The walk to Luccombe Beach takes about half an hour, depending upon your dawdling factor. I like to look at the awesome cliffs here that tower over you. Although they are predominantly sandstone, they are stained with the dark clays with which they are layered – the reason why they are so unstable too.

Bits of the cliff were falling as we walked along. Only little bits, and often in the water that flows off the great walls above, but you do get the feeling that these cliffs are on the move. Where great gashes have been made by a larger fall the yellow and orange hue of the sandstone is exposed and shines out from the darker walls around it. We kept away from the cliffs for this reason – no point in tempting fate.

There are also unusual fossils to be found – little shells and sea creatures. Also, great big lumps of iron, encased around sandstone or lumps of solid lava. Evidence that this area was volcanic eons ago.

Trees have fallen from the cliffs and lie on the beach, gradually turning into driftwood sculptures. A set of steps that once scaled a groyne now stand step-less over the disintegrating sea defence. 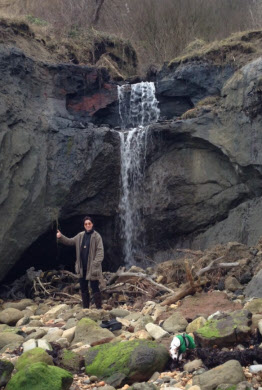 Near to the headland is a small cave-like entrance that is only a dent but there is a proper cave in the cliffs near to the chine at Luccombe, which I have seen pictures of online. We thought we spotted the entrance to it from the beach but didn’t want to get covered in mud trying to reach it and resolved to return when the weather is warmer and the clay is harder.

The real find this time was the waterfall at Luccombe Chine, which I don’t remember from previous walks. It’s a good 30 to 40 feet high and drops down the ominous grey cliff into a pool that has been made by the large rocks and stones on the beach along with bits of driftwood and other detritus. From here it tumbles through the rocks to the sea.

It must be the second largest waterfall on the Isle of Wight, second to the one in Shanklin Chine. I was tempted to name it Lady Penelope Falls. I bet it would be fun to bathe under it in the summer.