I was offered an interview with the Isle of Wight Festival’s John Giddings, so I demurely agreed – who wouldn’t?

It’s the 50thanniversary of the Isle of Wight Festival and this is the man who brought it back after 32 years of utter live-music drought on the Isle of Wight, apart from local bands in pubs.

The very first IW Festival in 1968 was organised by the Foulk brothers’ aka Fiery Creations and was for one day only in a field near Godshill, with about 12,000 people coming to see Jefferson Airplane and others. In 1969 the same team persuaded Bob Dylan to play and up to 150,000 fans descended upon several fields near Wootton. Then in 1970 they put on the largest ever festival at Afton with an estimated 600,000 attending and the crème de la crème on stage: Jimi Hendrix, The Doors, The Who, Free, Leonard Cohen and Joni Mitchell – they were all there.

Terrified that another event of such magnitude might invade the Isle of Wight, the council petitioned parliament to bring in The Isle of Wight Act in 1971, specifically for the ‘control of large overnight assemblies in the open.’ That was the end, my friend.

I moved back to the Island in 2000 and thought my kids would kill me when they got to band-seeing age and discovered that they’d have to go to Southampton, Portsmouth or further afield. And then in 2002 John Giddings brought Robert Plant and The Charlatans to Seaclose Park, and since then he’s brought so many of the greats: The Rolling Stones, David Bowie, The Who, REM, Coldplay, The Red Hot Chili Peppers, Neil Young, Paul McCartney – too many to list. 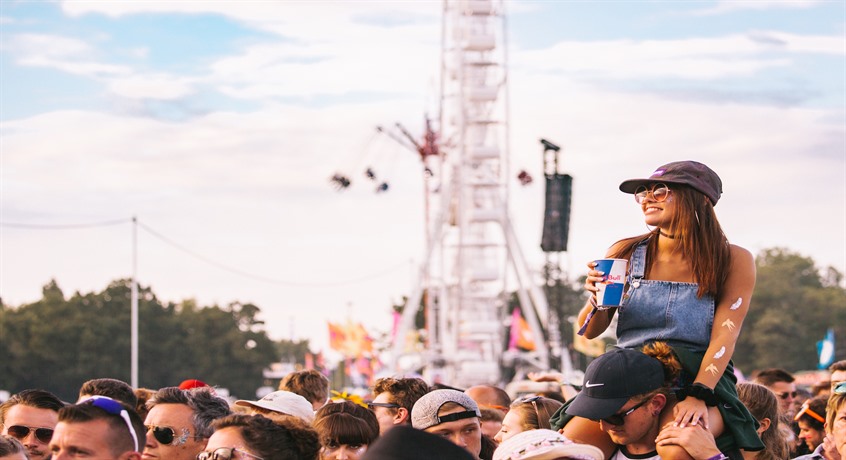 So who is John most looking forward to seeing this year?

“The audience - I’m excited by the audience. Sales are up this year and fingers crossed on the weather forecast. It’s so hard to pin it down to one group because I watch the audience more than the artists, because you can tell by the way the audience reacts how good the artist is, if you know what I mean. We book artists that are not necessarily in the charts at that moment in time, but they are capable of performing to 50,000 people in a field.”

And who should we look out for?

So are you going to wear gold?

“I don’t know. We were talking about that this morning. I’ll wear gold underpants. I’ll just tell people I’ve got them on.”

As long as you don’t get too drunk and show them to everybody?

You always keep the festival fresh by introducing new areas –are there some new things to look out for this year?

“There’s definitely a few things which will surprise you but I don’t want to say what they are in advance because that takes away the element of surprise. You can’t have the same layout year in year out because people come on a regular basis and will get bored with it. There have to be different attractions. We’ve got a real bungee jump there this year for Save the Children and they’re asking me to go and do the first jump off it and it’s scaring me senseless. I’ve never done one. It puts the fear of God into me.” 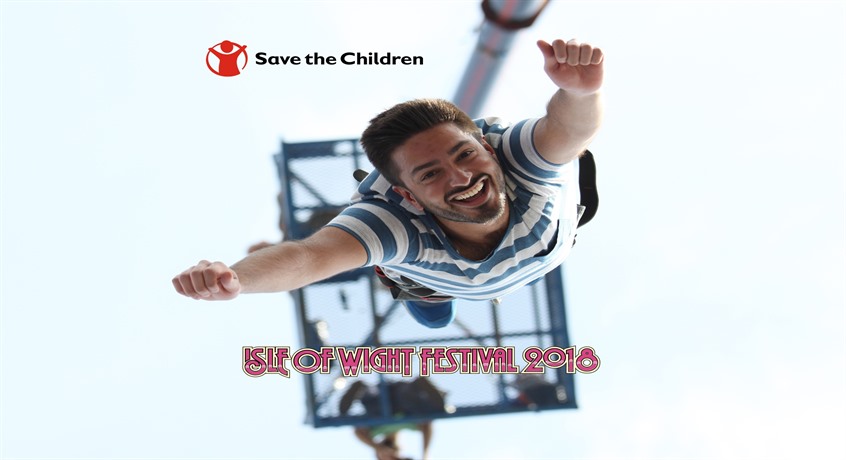 Are you going to do it?

“I don’t know. Ask me the day before and I’ll see how I’m feeling. I’ve got this fear of not being tied on properly. But the number of people who’ve signed up for it is incredible. Obviously lots of people find it very entertaining.” Book here

It’s 50 years since the first festival, and I see you have The Pretty Things who played at the first one…

“They’re going to perform the whole of their iconic album SF Sorrow, one of the first concept albums, before The Who did Tommy, before The Beatles did Sgt Pepper. I just think you have to have something that gives a nod to the past. And on the Thursday, Camper’s Night, in the Big Top we’ve got T Rexstasy, the tribute band, opening the show because Mark Bolan was at the first festival as well, bless his heart.”

“No but I was at the 1970 festival and saw Jimi Hendrix and the Doors and the Who. Fantastic! That’s what helped to inspire me to get into the music business. That’s the reason I restarted the festival. I though I’ve been to everybody else’s, why don’t I have a go on my own. 15 years later I’m realising how much work it is.”

“It’s the most enjoyable thing you can ever do, if you don’t mind risking the money. Everyone thinks it’s a cash cow, but it’s very, very expensive to put a festival on. You spend a £1m on security and police alone and if you get it right it’s great. But then you’re forever praying for the weather, you end up with a crick in your neck looking at the sky the whole time.”

But you’ve been very lucky…

“Yes I have. I think I worked it out. It’s like 75 days of festival and four days of rain, which is incredible.”

And this year you’ve moved to the Glastonbury slot…

“This year because there isn’t a Glastonbury I thought I’d take the gamble and move back by a couple of weeks and it seems to be having an effect judging by the ticket sales, so that’s good.” 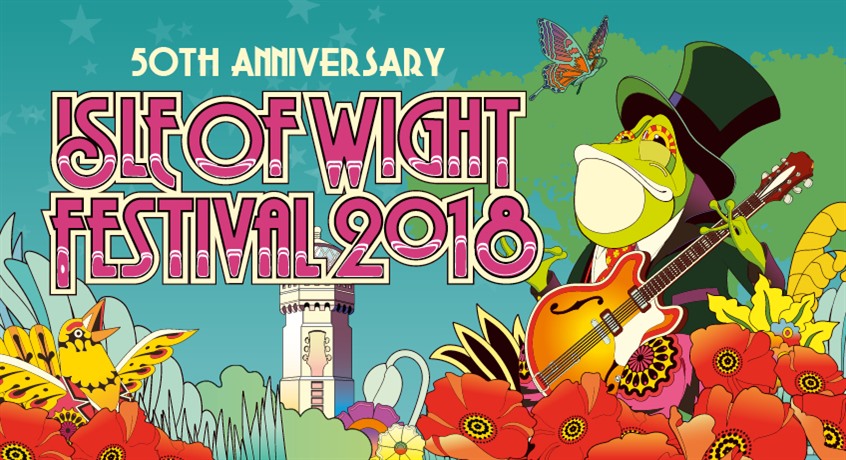 So you’ve got two more years of 50thanniversaries now.

“(John laughs loudly). It’s also the 50thanniversary of the Jimi Hendrix album Electric Ladyland this year, and we have a field called Electric Ladyland. So that’s something else to celebrate, He was one of my ultimate heroes – there will never be another Jimi Hendrix.”

Who would you get to pay homage to him?

“Before he died, Prince had agreed to do a Jimi Hendrix performance. But sadly he passed away and it never occurred. He’s one of the few acts I regret never having. There are very few people who could pay homage to Jimi Hendrix and do it well if you know what I mean.”

“I’m going to see Roger Waters in Hyde Park - another one of my heroes. If they would ever talk to one another again I’d love to get them for the Isle of Wight but I think the chances, judging by the interviews you read, are few and far between.”

But Dave Gilmour came on and played on the Wall tour?

“Yes he came on and played Comfortably Numb at the Roger Waters show so you never know. Never say never in music.” 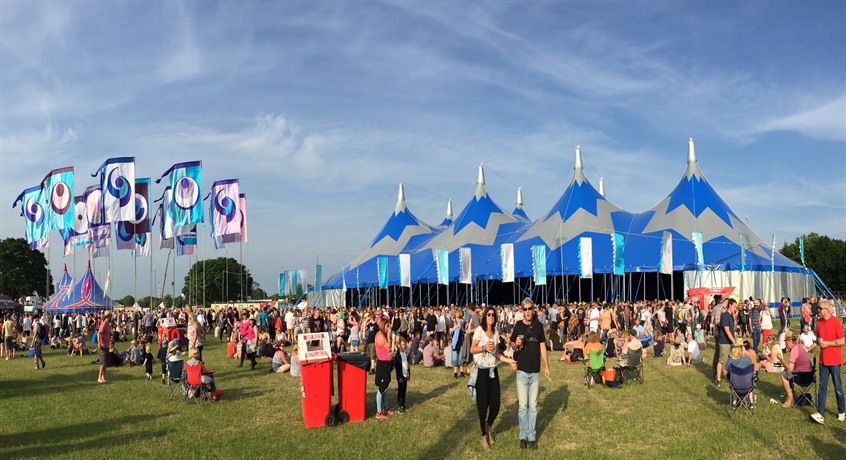 Do you think there’s any chance of Noel Gallagher turning up and Oasis reforming?

“Not this year. I wouldn’t be surprised, sometime in the future, but definitely not this year.

That would be a bit of a coup wouldn’t it?

“That would be incredible. But you don’t want to tempt fate and suggest it.”

“He’ll probably come down. He’s got an open invitation any time. I mean without him there would never be an Isle of Wight Festival so he’s like guest of honour. He’s a great chap.”

So is John Giddings going to be wearing gold underpants or not and is he going to do that bungee jump? I guess we shall find out…well maybe not both. Be sure to offer him a drink if you see him.