Donkeying Around – Meet our Island Donkeys

The Isle of Wight is a great place for donkeying around with lots of four legged local residents who you can come and meet.

Winners of the 2016 and 2017 myIsleofWight Awards for ‘The Best Place to Make A Furry Friend’, and Red Funnel’s charity of the year for 2018, the Isle of Wight Donkey Sanctuary are now one of the Island’s top tourist attractions and they don’t even charge an admission fee.

Plus there’s a small herd of lovely donkeys to meet at Carisbrooke Castle, who have a really important job to do.

“There’s only one free attraction that we compete with, and that’s the beach!”

Just outside of Wroxall, near Ventnor, the sanctuary has 97 donkeys and 26 horses and ponies, including a herd of 7 Shetland ponies (May 2018), and is open every day of the year from 10am till 4.30pm (except Christmas Day and New Year’s Day), weather permitting.

A huge board featuring all of the donkeys greets you when you enter, and you’re given a donkey spotting sheet to mark off the donkeys as you meet them – bring a pen, or buy one in the donkey shop.

“People find calmness from being with the donkeys,” said Derek. “It’s very therapeutic for many people. They like to potter around and pick their favourite donkey.” 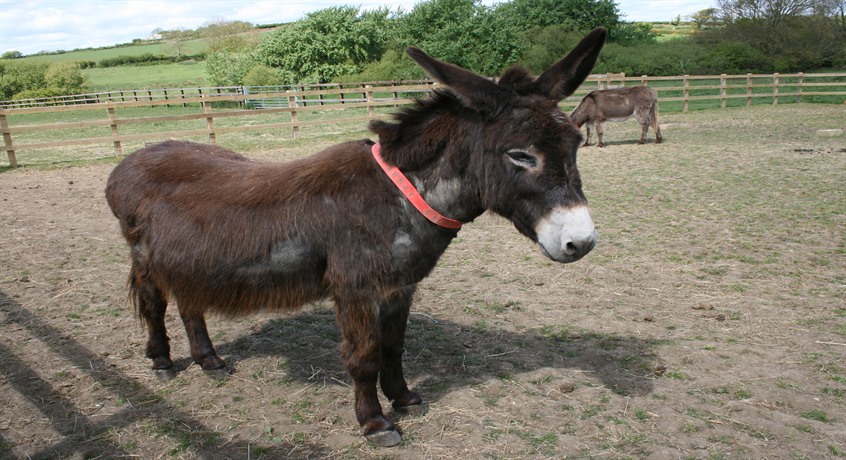 All the donkeys are British apart from Busby, a dark brown Pyrenean donkey, with his distinctive white muzzle and white ringed eyes. Busby was owned by an island family and brought back with them after they spent some time living in France. He heads up the herd of Outreach donkeys who still work for a living – visiting events and residential homes, and being groomed by visitors.

You can groom a donkey at the sanctuary in the mornings, and afternoons are reserved for donkey walking – walk your donkey around the ‘Shetland Slalom’. Donkeys can be petted through or over the fence but they do also occasionally nip, so take care!

Jimbob, one of Carisbrooke Castle’s working donkeys that walk the wheel to bring up water from the well, was recently retired to the Donkey Sanctuary.

“Getting Jimbob was a big thing for us,” said Derek. “It was a big vote of confidence from English Heritage in the welfare of the animals at the Donkey Sanctuary.” 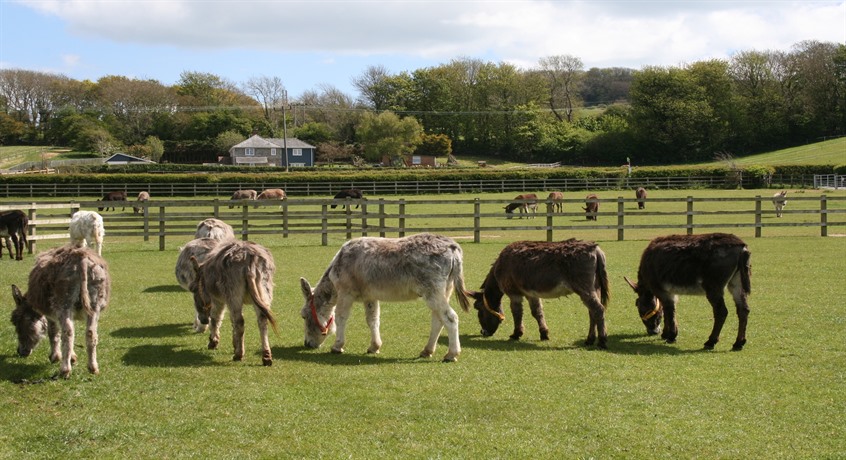 The herd of seven miniature donkeys are perhaps the cutest, with the black and white ones, Ant and Dec getting the most attention. There’s also an ‘Old and Proud’ OAP herd, a youngsters herd, permanent and temporary special care herds and a diet herd, along with the main boys herd and main girls herds. The volunteers who work at the sanctuary will always help you with information about the donkeys.

New for this year is the Nature Zone, created in conjunction with the Hampshire and Isle of Wight Wildlife Trust; a beautiful area behind the farmhouse with walks, picnic tables, ducks, birds and wildlife, and a stream that is one of the best places for water voles on the whole island. There are more walkways around the site now too, and it’s possible to take a circular walk around the entire site.

There are regular open days and celebrations at the Donkey Sanctuary – check the website for details. On Sunday May 27th there’s a Fun And Friendly Dog Show and on Sunday June 3rd there’s an Animal Blessing Ceremony with the local vicar and everyone is invited to bring their pet – if you’re on holiday with your dog you might like to join in. 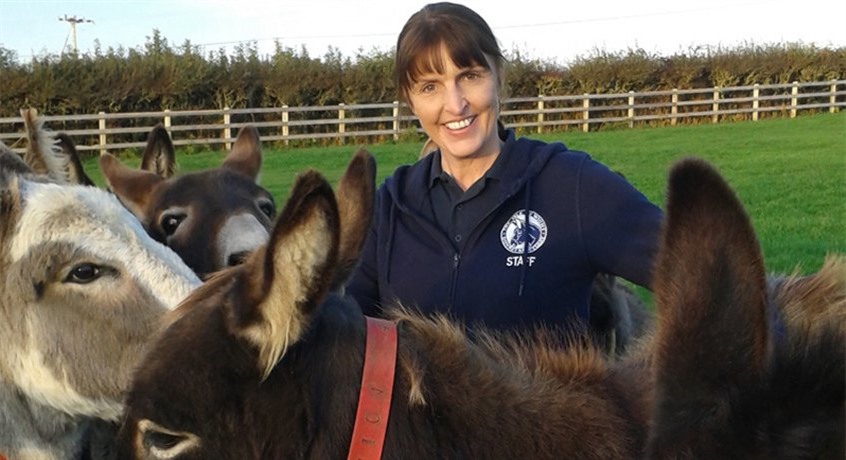 There’s a great donkey shop, with loads of new donkey merchandise such as a retro range based on the old railway posters. “It reminds people of the era when we used to see donkeys on the beaches,” said Derek. Plus there’s a good clothing range, and a household range and half of the shop and a large white marquee in the courtyard make up the donkey café – named after Dillon, the very first donkey. ’Busby’s’ shop’ sells books and bric a brac donated by their supporters and icecreams.

The primary aim of the Donkey Sanctuary is to look after the health and wellbeing of the animals, which does cost a lot of money. To that end they are a visitor attraction to help pay the bills. But the sanctuary does also support events around the island such as school fairs and the Santa Specials at the IW Steam Railway.

The Donkey Sanctuary are a CIO (Charity Incorporated Organisation) and are run by a trust, who employ around ten people (mainly part time) and have between 30 and 35 volunteers .

All of the donkeys are adoptable for just £20 per year plus £1.99 sign up fee  – choose the one you would like to support, sign up, and you receive in the post an ‘adoption pack’ (which makes a lovely gift) and includes a certificate, a picture of your donkey and twice yearly newsletters. You can do this by scanning the QR code of your donkey from the board that features them all, and then paying by Paypal too. 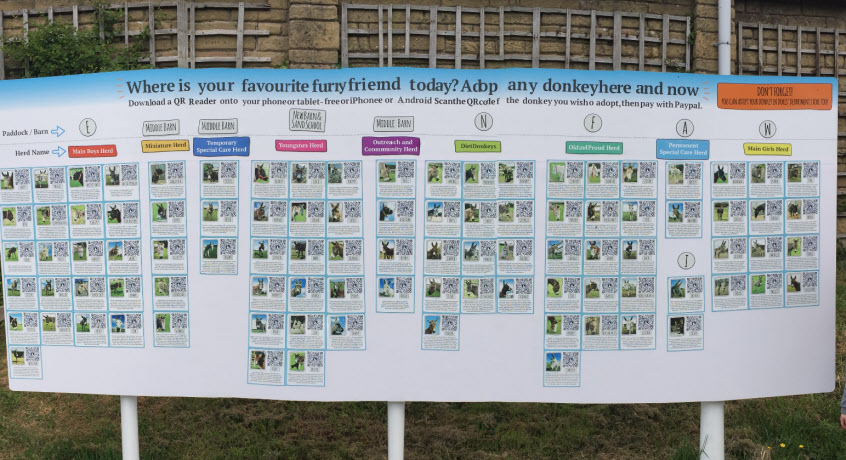 So if you would like to meet a furry friend, and even adopt one and be updated on your donkey throughout the year then make sure to visit The Donkey Sanctuary during your holiday on the Isle of Wight.

At Carisbrooke Castle they have a stable of donkeys that are there to ‘walk the wheel’ in the well wheel house, to bring the bucket of water up from the 150 foot well.

Walking the 16th century wheel is not difficult for the little donkeys who happily (mostly!) enter the huge wooden wheel and begin to walk. Gradually the bucket comes into view as it rises from the murky depths below. Those donkeys on duty are in the stables to the side of the wheelhouse if you want to meet them. The others are happily grazing in nearby fields until it’s their turn to walk the wheel.

All of the donkeys have names beginning with ‘J’. This tradition was started when Charles I was a prisoner at Carisbrooke because when he wrote letters, or was planning his escape route, he always signed his letters with a ‘J’. So, for 150 years all the donkeys at the castle have had a name beginning with ‘J’. 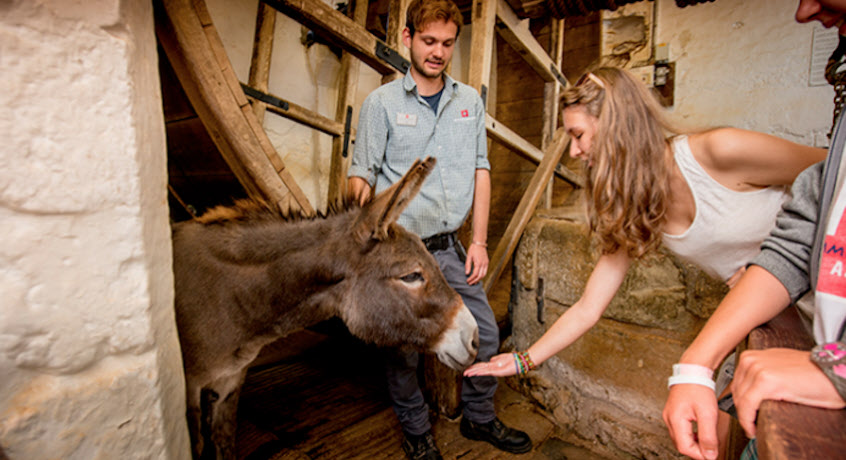