From tree to bar – that is how Abraham makes his Seaforth Chocolate here on the Isle of Wight - and the sacks of cocoa beans are delivered by a beautiful old 32m Brigantine sailing vessel to the end of Yarmouth Pier, so there’s zero carbon used in their journey here from the Dominican Republic or Grenada.

In fact it was a sailing course that initially brought Seaforth to the Island, “I remember calling my wife and saying this would be a nice place to live and work,” said Abraham, and they moved to Yarmouth with their two daughters in January 2014.

“I was trying to set up in London but thought it would be better to have a place where the boat would dock closer to where the final product is made,” explained Abraham. “Three guys started the company, giving the Brigantine’s name ‘Tres Hombres’ and it is this boat that does the Atlantic crossings.

“Yarmouth Pier is the ideal place to unload because they don’t have an engine on board – they took it out to make more room for cargo!” said Abraham. “They also bring rum back from the Dominican Republic and coffee. I was initially going to do coffee but I noticed that chocolate had similar properties.

“Chocolate has always been part of our lives. On occasions with family and friends, the appropriate gift, or a token of affection – it’s about sharing and caring and I want to bring that back to Seaforth Chocolate.”

And the product is a rich dark 70% chocolate in bars for which Abraham has also designed the intricately hand drawn packaging – he did a BA in Art Practice at Goldsmiths.

You can buy a 70% chocolate bar from Grenada or one from the Dominican Republic and Seaforth also sells bars encrusted with smoked sea salt, another with a coating of granola, one with almonds and another with cranberries. He also produces a 100% bar. 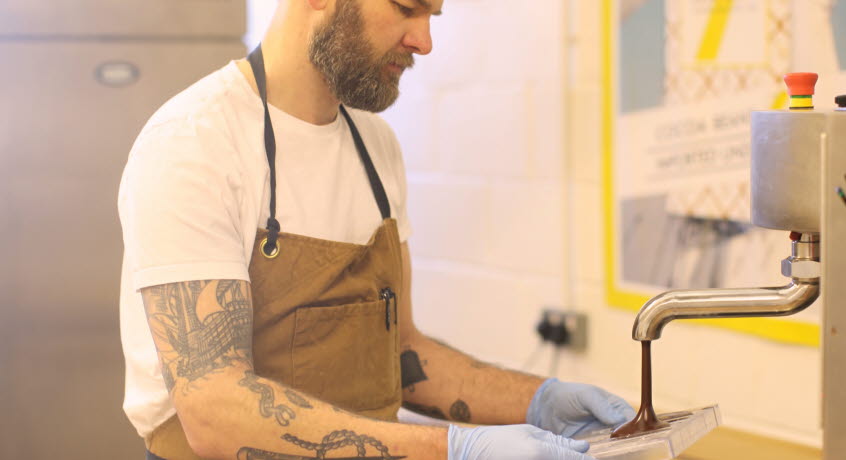 “I taught myself to make chocolate and started making it from my home,” said Abraham. “I began trading in February (2015) and I began selling it at Maltby Market in London. I got really good feedback and was approached by buyers from Fortnum and Mason, where Seaforth Chocolate is now stocked.

“I wanted to be in control of the whole process of chocolate making and have a direct connection with the farmers and producers. The first process is fermentation – the pods are harvested and cut open. The seeds are removed and collected in 20kg bags which are carried out of the Caribbean forest.

"These beans are taken to a fermentation facility where they are fermented in four physical steps made from pinewood. After fermentation they have to be dried usually undercover in the tropics. After this, the beans are loaded into 65kg or 70kg bags, you should see these guys carry these bags on their heads!”

At his chocolate factory in Cowes Abraham was making a new batch of chocolate and showed me how it is made. When the beans arrive they have to be sifted to take out the flat and broken ones that may be bitter and may affect the flavour. "It’s all about flavour! And staying true to the bean!" said Abraham. 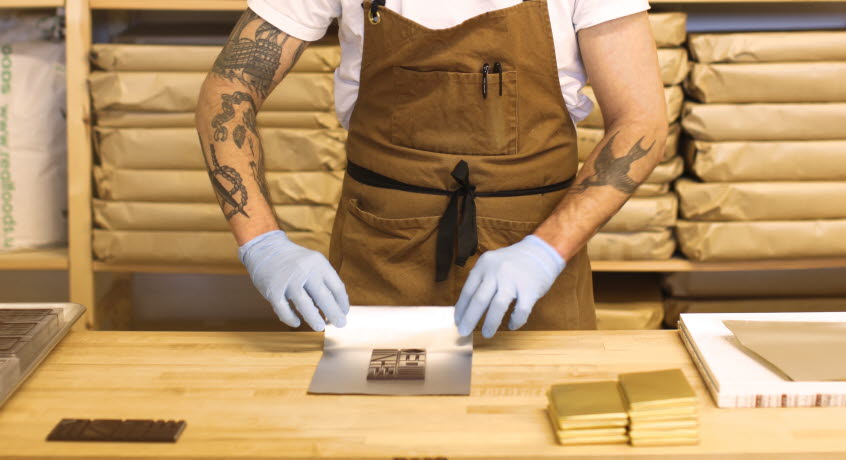 They are then winnowed to get rid of the husks and cocoa ‘nibs’ are produced. These can be used to make a sort of ‘chocolate tea’, which is made in a cafetiere and quite refreshing with milk and optional sugar. Next the nibs are put into the stone grinder and ground into a thick liquid. Chocolate is around 50% oil so no additional cocoa butter or emulsifiers are required.Sugar is then added and the mixture is ground for another 60 to 96 hours.

After conching, as it is called, the chocolate is poured into a pan and left to set, then wrapped and stored. “The longer it is stored, the milder it becomes,” said Abraham.

It is usually stored for at least a week before being tempered. Tempering requires the chocolate to be heated and cooled in a special machine, and then once it is ready it can be poured into Seaforth’s specially designed bar moulds – eight squares which are loosely inspired by boat signal flags.

“At the moment I am selling my chocolate at the ‘Slow Food Market’ at the Rosewood in Holborn in London,” said Seaforth. The aim of this market is to revive the traditional marketplace culture where urban consumers are reconnected with rural farmers and artisans – just the place for Seaforth’s fabulous hand-made chocolate, with beans delivered by Brigantine to Yarmouth Pier.

Currently Seaforth Chocolate can be bought via the website. Recently Philippe at Off the Rails restaurant in Yarmouth and his head chef Peter Corney teamed up with Abraham to create a Gastronomic Cocoa Evening, where a five course menu was created using Seaforth Cocoa and Chocolate and there may be more of these style feasts in the future.