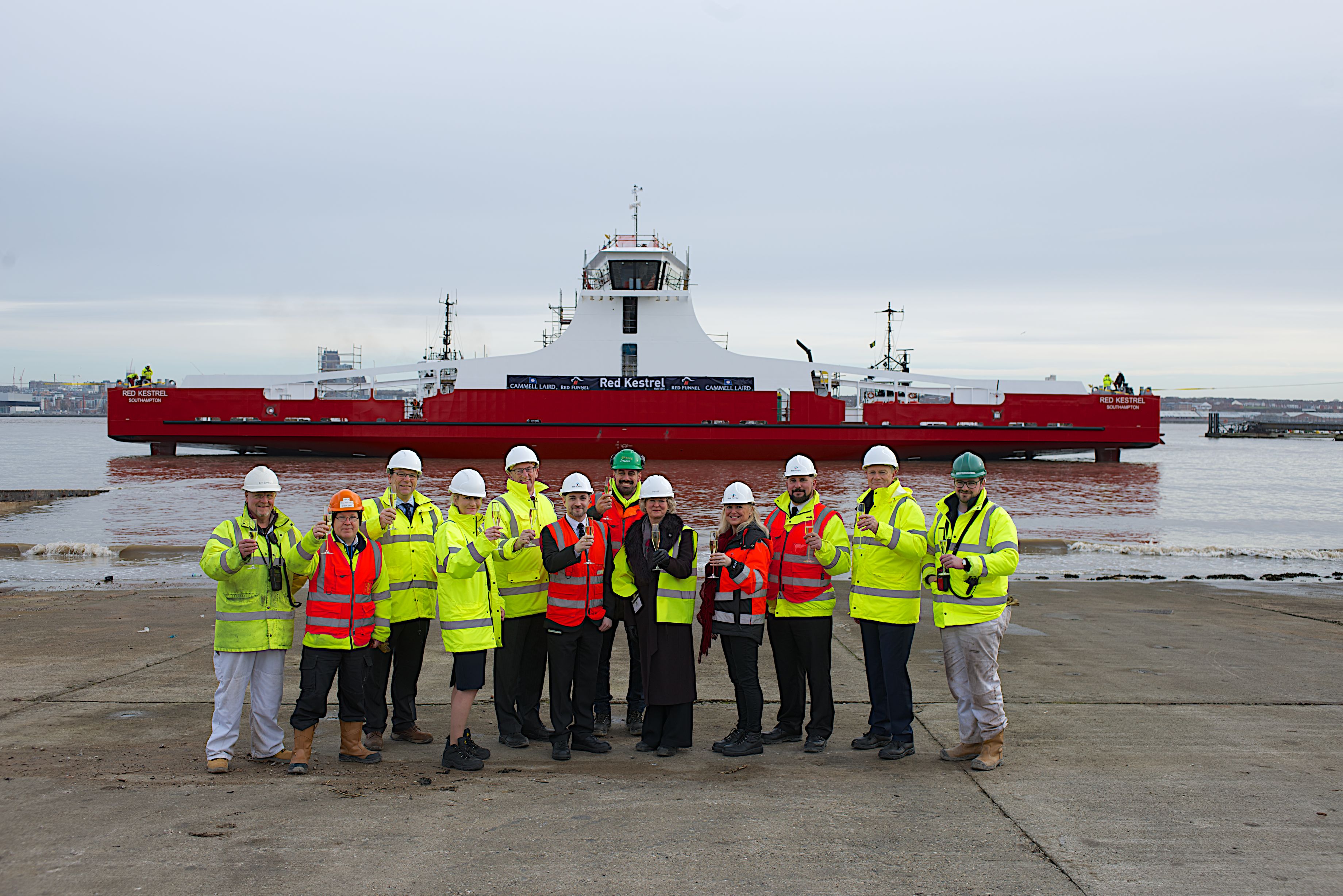 20 Feb, 2019 — In Birkenhead today the latest vessel for the fleet of Red Funnel, the original Isle of Wight ferry provider, was launched. Red Kestrel, a new freight-only RoRo vessel, will operate between Southampton and Isle of Wight. The vessel will officially join the fleet on arrival in Southampton, and enter service in May, following a trials and training period. The launch event, marks the debut of Red Funnel's first dedicated RoRo freight ship since the company’s inception almost 200 years ago.

Red Kestrel, the £10million vessel, was built at Cammell Laird’s famous shipyard in Birkenhead and highlights Red Funnel’s commitment to British shipbuilding and engineering. Red Funnel has a history of investing in UK shipyards, having taken delivery of its high-speed ferries Red Jet 6 and Red Jet 7 from an Isle of Wight based shipyard.

Fran Collins, CEO of Red Funnel, said, “We are delighted by today’s launch of Red Kestrel. The addition of a new ship is always an exciting time for everyone in the company and we look forward to taking delivery in April. We’re thrilled that not only will Red Kestrel increase our total capacity and enhance convenience for our cross-Solent customers but we also take tremendous pride in supporting the revival of world-class shipbuilding in this country. It’s a very special feeling for all of us and we’re in good hands with Cammell Laird. They have been a brilliant partner and we’re very grateful for all their tremendous work.”

Tony Graham Cammell Laird Chief Operating Officer, said, “Cammell Laird would like to thank Red Funnel for placing its trust in us to build this wonderful state-of-the-art ferry, drawing on all our marine engineering expertise.

“We are especially proud to be working for a British ferry company, winning the contract against international competition. Today marks an important milestone in the project and we are proud to see the Red Kestrel join a collection of ferries that Cammell Laird has built in recent years. Shipbuilding is back in a serious way on the Mersey and it has been brilliant to see the Red Kestrel being built alongside the iconic RRS Sir David Attenborough, which is the largest commercial vessel built in Britain for a generation. Cammell Laird sees a big market in ferry repair, conversion and new build and we will be showcasing our work on the Red Kestrel at the Nor Shipping trade fair in Oslo later this year. It is tremendous to see more ship owners and ferry operators choosing to build in the UK, this is very much in line with the Government’s National Shipbuilding Strategy which aims to recalibrate British shipbuilding as a major job and wealth creator now and into the future.”

Red Kestrelis Red Funnel’s first ship to be designed for freight traffic. As a freight vessel she is limited to 12 passengers and constructed specifically to provide additional year-round freight capacity for Red Funnel’s Southampton-East Cowes route, which currently handles 53% of all freight movements across the Solent. Red Kestrel is due to enter service in May 2019, with the current ferry timetable to be updated to accommodate the vessel.

At 74m in length, she will provide 265 lane metres of roll-on/roll-off freight capacity and will carry up to 12 passengers. To minimise the environmental footprint, the hull shape has been designed specifically to reduce wash and a propulsion package has been selected to make her highly fuel efficient whilst meeting the latest Tier III emission regulations. The use of proven azimuth thrusters supplied by Rolls Royce, will also make the ship very manoeuvrable.  The crossing time of 55-60 minutes will be identical to Red Funnel’s existing Raptor class ro-pax ships and she will use the same berths in Southampton and East Cowes.

Founded in 1828, Cammell Laird is one of the most famous names in British shipbuilding and is based on the River Mersey at Birkenhead. The site covers 130 acres and includes four dry docks, a large modular construction hall and extensive covered workshops. It is also at the centre of a marine and engineering cluster with easy access to support services classification societies and port state authorities. Today, Cammell Laird is rapidly expanding as a cutting edge engineering services specialist with a highly skilled workforce and extensive world class facilities to support a broad range of sectors and projects. The company has also continued to develop its capability in the marine sector, and is a world leader specialising in military ship refit, commercial ship repair, upgrade and conversion and shipbuilding.