10-02-2017  Funds raised by Red Funnel for Ability Dogs 4 Young People, the ferry company's chosen Charity of the Year for 2016, totalled £50,000 which allowed the charity to buy a van for the training of its assistance dogs.

Ability Dogs 4 Young People has been able to purchase the sponsored van thanks to the generous donations made by Red Funnel’s staff and customers who donated online and supported a fund raising parachute jump earlier in the summer. The company also made a match-funded donation. 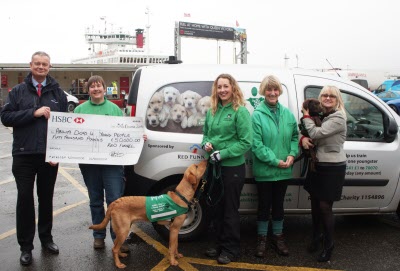 The Isle of Wight charity trains assistance dogs to enhance the independence of disabled young people and children living on the Island, and the new van will be crucial to the dogs’ comprehensive training process.

Carol Court, CEO of Ability Dogs 4 Young People, said: “We are thrilled to have had the opportunity to buy this van, which is so essential to being able to transport our dogs around the Island. As part of their training, the dogs must be conditioned to performing in various real world situations, so it’s very important that we can get them to the shop, the ferry, our training centre and to their new recipients’ homes. The dogs really do get a lot of mileage”.

“Red Funnel’s support throughout the year has been hugely important to us. Not only has the company raised a great amount of funds that we’ve been able to use directly, but our presence on the ferries’ on-board video screens has generated so much positive publicity for us, and this increased awareness has been absolutely fantastic.”

Shirley Anderson, HR director at Red Funnel, said: “We’re really proud to have been able to raise £50,000 in funds for such a crucial piece of equipment for Ability Dogs 4 Young People. The charity does amazing work on the Island and we are so grateful to everyone who donated money to such a worthwhile cause”.

Red Funnel’s Charity of the Year for 2017 is the Hampshire and Isle of Wight Air Ambulance.