Red Jet 7 Ahead of Schedule

14-11-2017  The construction of our second state-of-the-art high-speed passenger ferry, Red Jet 7 is rapidly taking shape at Wight Shipyard Co in East Cowes on the Isle of Wight. The £7m, 41 metre vessel is expected to enter the water ahead of schedule in May 2018.

The twin aluminium catamaran hulls are now easily recognisable inside the famous Union Jack branded Columbine building in East Cowes. The shell plating on the twin hulls is complete and welding work is underway in the hull void spaces, bulkheads and double bottoms. Once complete, the fuel and water tanks will be ready for installation. 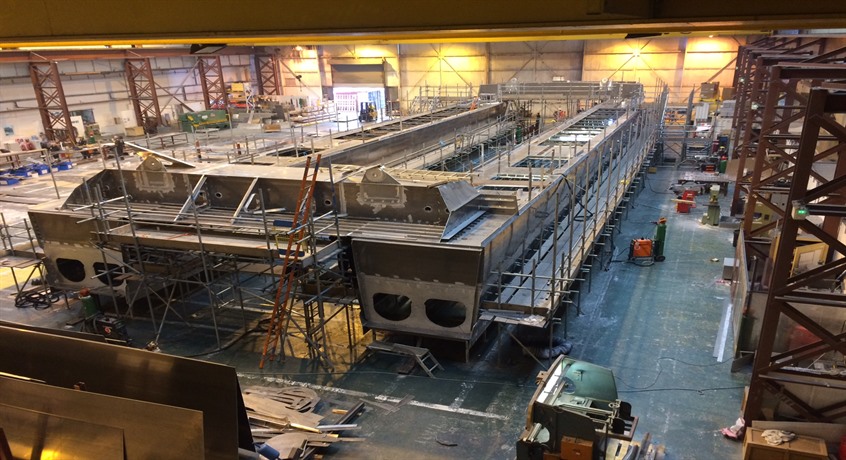 As with Red Jet 6, the new vessel's superstructure and hulls are completed separately. The jig upon which the superstructure is built has now been laid in the building hall and prefabrication is underway. When complete, the passenger cabin will be lifted onto the hull and mounted on shock-absorbing resilient mounts to provide maximum passenger comfort.

Kevin George, Red Funnel's CEO, commented: "We are delighted the construction of Red Jet 7 is progressing so well, which is testimony to the highly skilled workforce at Wight Shipyard. We expect the sea trials and crew training to commence in June 2018 ahead of her official naming ceremony in Cowes in July."

Once named, Red Jet 7 will join sister ship Red Jet 6 and the Australian built Red Jet 4 on Red Funnel's flagship Southampton-West Cowes route. Red Jet 7 will increase passenger capacity by 51% which means the Hi-Speed Red Jet service can carry up to 825 passengers per hour in each direction at peak times of the year. This is significantly more than either of the cross-Solent routes serving Ryde and reinforces Southampton's position as the gateway to the Isle of Wight for customers travelling without a vehicle.

More information about Red Jet 7 and the progress made to date is available here.