Red Jet 3 to undergo refit on the Isle of Wight

13-02-2017  Red Funnel has announced that Red Jet 3, its 1998 Cowes built Hi-Speed passenger catamaran will undergo its annual survey and refit on the Isle of Wight later this month (February 2017). 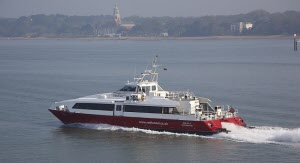 The original Isle of Wight ferry operator has signed a contract with Wight Shipyard Ltd to carry out the work at The Columbine in East Cowes, marking the first time the vessel has been refitted on the Island since it was built by FBM Marine in the late 90's.

The planned work involves inspection of the hulls, removal and refurbishment of the twin MJP waterjet units, painting, antifouling and re-certification. Due to the weight limitations of the hoist and facilities at Venture Quays, unusually both MTU 396 engines will have to be removed from Red Jet 3 before she can be safely lifted from the water.

Kevin George, Red Funnel's CEO, commented "With a net tonnage of 77 tonnes, Red Jet 3 is really too big for the facilities available at Venture Quays. However, by removing her engines prior to lifting we have found a way to refit her in Cowes and provide further support for marine jobs on the Island. In the not too distant future, we hope to see the development of new marine facilities at Kingston which can be used to build and repair much larger vessels. Kingston would allow us to refit Red Jet 4, Red Jet 6 and all future Red Jet's on the Island and bring significant benefits to the local economy."

Peter Morton, MD of Wight Shipyard, said: "In addition to our current new-build work for London based Thames Clippers, we have been successful in winning a number of important refit contracts. This valuable order from Red Funnel demonstrates our unrivalled skills base and competiveness in the fast ferry repair market."