To celebrate 50 years of continuous high-speed service between Southampton and West Cowes, Red Funnel Ferries has announced that it will be the headline sponsor of this year’s Cowes Week fireworks. 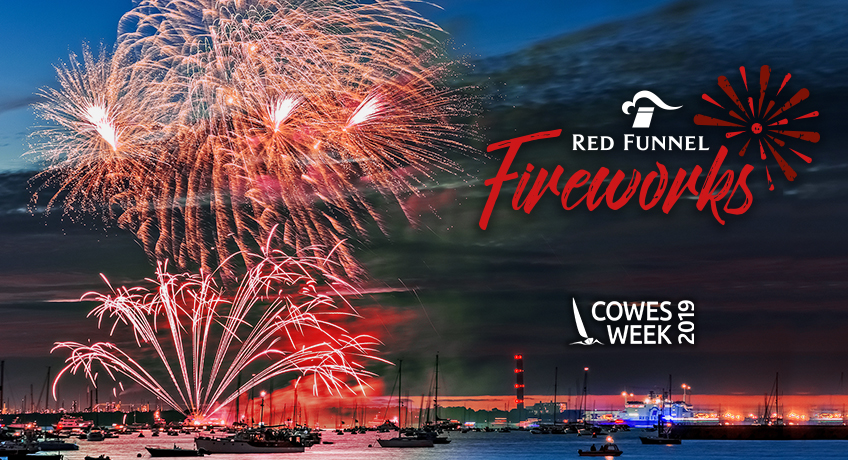 To mark such a big anniversary, and to extend thanks to its customers and staff, past and present, Red Funnel, the original Isle of Wight ferry provider, will be lighting up the skies on Friday 16th August at 21:30 with the unmissable Red Funnel Fireworks at Cowes Week to round off a week of sailing at the world-famous annual regatta.

Over the last 5 decades a total of 13 hi-speed vessels have come and gone into the Red Funnel fleet, starting with the hydrofoils (Shearwater 1-6), through to the waterjet propelled Red Jet fleet (1-7).

Commenting on the sponsorship, Fran Collins, CEO of Red Funnel, said: “This year marks a significant milestone for Red Funnel as we celebrate 50 years of high-speed service across the Solent. Committing to headline sponsorship of the Cowes Week fireworks just felt like the right way to celebrate this momentous event in our history. The Red Funnel Fireworks at Cowes Week event is a tribute to all of our staff and customers as a heartfelt thank you for their support over the last 5 decades, and we really hope everyone enjoys the show. We’re a longstanding supporter of Cowes Week but it felt like time for us to take that support to the next level. Cowes Week is deeply rooted in the history of Cowes and Cowes is our Island home port. It just makes perfect sense for us to support making this exciting event the best it can be, and we can’t wait to light up the skies. It’s going to be a fantastic show!”

Commenting on what to expect of this year’s fireworks display, Kate Johnson, Commercial & Marketing Director at CWL said: “We’re thrilled that Red Funnel has taken on the headline sponsorship of the Fireworks Display, having been a long-term supporter of the regatta. It will be another fabulous display this year and those watching may notice a predominant red and white theme, in recognition of their support.”

As in previous years, Red Funnel will also host two dedicated fireworks party boat excursions, one from Southampton and one from East Cowes, providing an up close view of the fireworks from the Solent.

Cowes Week is one of the UK's longest running sporting events, having first taken place in 1826. The aspirational and inclusive sailing regatta is the largest of its kind in the world, attracting between 800 and 1,000 yachts in up to 40 classes. Around 8,000 competitors race during the week ranging from weekend sailors to World Champions and Olympic medallists.

The lively après-sail atmosphere at Cowes Week means there are plenty of social and exciting onshore activities for sailors and the thousands of spectators who visit Cowes each year. The next edition of the regatta takes place from 10 – 17 August 2019.

Cowes Week Limited (wholly owned by Cowes Combined Clubs Limited) was formed in November 2007 to provide a single management board with overall responsibility for the event. This ensures that the business operation of both the shore-side and racing elements are managed in a streamlined way.