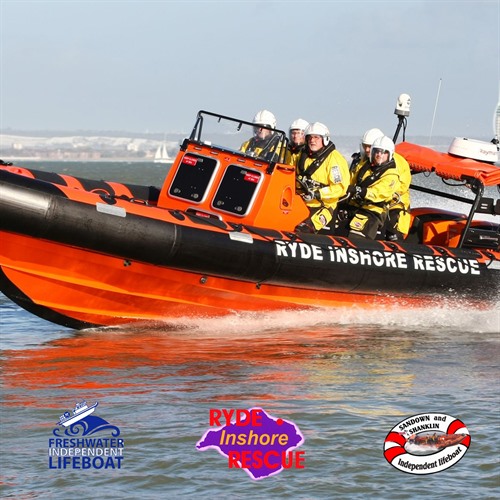 The lifeboat groups joined forces to submit a joint application to Red Funnel’s COTY program and will share the funds raised. Funding will support the groups’ operations which are united in a common goal of saving lives at sea and along the coastline. All three groups, which work in conjunction with other emergency services such as Her Majesty’s Coastguard, RNLI, Ambulance, Police, IW Search & Rescue, as well as suicide prevention groups, are entirely operated by volunteers and are privately funded through donations.

Speaking on behalf of the group, Mark Birch, Operations Manager at Sandown & Shanklin Independent Lifeboat, said: “We are absolutely thrilled to have won this distinction. What makes it even more special is that it has been awarded by Red Funnel staff and customers who travel the same waters in which we serve. Alongside our Independent lifeboat family, Freshwater Independent Lifeboat and Ryde Inshore Rescue, we are committed to ensuring that anyone in need of assistance in or around our waters knows that our volunteer crews are on call 24/7 and ready to offer assistance.”

Principle Fundraiser Rod Adams, of Freshwater Independent Lifeboat added: "To have a major sponsor such as Red Funnel supporting us for a whole year means a great deal to us. It could not have come at a better time as major projects now under way need every bit of support we can get."

Red Funnel received sixty applications from charities all over the Isle of Wight and Hampshire. Following a detailed internal review, these were longlisted to eight before Red Funnel staff voted to select the top three. This final shortlist was then provided to Red Funnel customers to vote for their chosen charity, with the Isle of Wight Independent Life Boats receiving the most votes by the time the ballot closed at midnight on 28th January 2020.

Fran Collins, CEO at Red Funnel, said: “We’d like to give our congratulations to the Isle of Wight Independent Lifeboats which has been selected as Red Funnel’s 2020 Charity of the Year. It was tough competition with a great number of worthy applications. As a fellow maritime organisation, this year’s elected charity has a great synergy with Red Funnel, and we look forward to working in partnership throughout the year as the group continues to raise funds for its vital work at sea and along the Hampshire and Isle of Wight coastline.”

The two runners-up in Red Funnel’s COTY section process were the LEAF Foundation (Monkey Haven), an award-winning Island attraction with a serious purpose of caring for creatures in crisis and raising awareness of global environment and animal welfare through education and entertainment, and Daisy Chains IW, an Isle of Wight based charity that supports children (and their families) who have been diagnosed with long-term health problems, life-limiting conditions and disability.

Red Funnel also unveiled that it has committed a cash donation and equivalent support to the sum of £5,000 each, to both the LEAF Foundation (Monkey Haven) and Daisy Chains IW. The company will work with the respective charities on specific projects over the next 12 months.

Isle of Wight Independent Life Boats succeeds Mountbatten Isle of Wight, which held the distinction of Red Funnel’s Charity of the Year, 2019. A final count of all funds raised, and an official cheque presentation is due to be announced in February.