22-02-2018 - Red Funnel's Charity Committee led by Emily Standing has presented a cheque for £55,000 to Hampshire & Isle of Wight Air Ambulance (HIOWAA). The event marks the culmination of Red Funnel's fundraising efforts for its 2017 Charity of the Year. 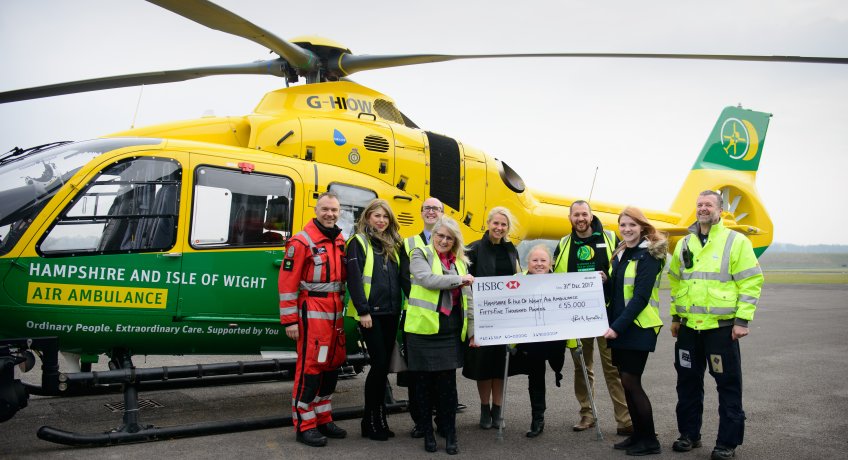 Each year, staff at Red Funnel shortlist three local charities from those who have applied to be the company's Charity of the Year, with the public voting for the ultimate winner. HIOWAA was selected for 2017 and staff at the cross-Solent ferry firm have been busy finding lots of creative ways to raise money for the life-saving organization. Initiatives include dress down Fridays, a family fun day at Thruxton Motorsport Centre as well as participating in the '10 dance challenge'.

The Air Ambulance exists to bring immediate, lifesaving critical care to patients when they need it most. The helicopter flies 365 days a year, both day and night, 19 hours a day, providing an efficient, prompt response to road traffic collisions, sporting accidents, collapses and many other incidents throughout Hampshire and the Isle of Wight.

Kevin George, Chairman and CEO of Red Funnel said: "I am always impressed by the creativity and dedication of Red Funnel's staff, especially our Charity Committee for the work they do to raise money for our Charity of the Year and the many other local charities we support. The Hampshire & Isle of Wight Air Ambulance save lives and we're delighted that our staff and customers have been able to help keep the service airborne".

Ray Southam, Corporate & Community Fundraiser of HIOWAA commented: "We're greatly honoured to have been Red Funnel's charity of the year for 2017 and the amount of money that has been raised is fantastic. It has been great to work with Red Funnel and I would like to thank everyone for their contribution."

The Isle of Wight Donkey Sanctuary was chosen as Red Funnel's 2018 Charity of the Year following the public vote last December. Red Funnel will work in partnership with the charity to raise funds to help sustain programs aimed at teaching students about agriculture and animal welfare as well support a variety of compassionate and therapy related initiatives within the community. The charity's staff routinely take the donkeys to visit care homes, Alzheimer's centres and schools, where children with special needs particularly benefit from the interaction.