The Friends of the ORP Blyskawica, East Cowes Heritage Centre and Friends of East Cowes are inviting the public to commemorate the 80th anniversary of the night 4-5th May 1942 when the Polish destroyer ORP Blyskawica defended East and West Cowes from certain obliteration by the Luftwaffe.

The commemoration event will be held in East Cowes between 30th April - 8th May 2022 with events also happening in Cowes, please see the full program of events below. There will be a commemoration service, talks and exhibitions, a Polish market, traditional Polish dancers, children's performances, Blitz walk and a 1940's dance evening. 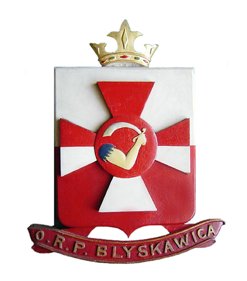 In May 1942 the Polish Navy destroyer ORP Błyskawica was in Cowes and her gallant crew's actions will always be remembered when she defended the two towns from a German aerial attack.

Błyskawica (Lightning) and her sister ship Grom (Thunder) were built for the Polish Navy by J.S. White's shipyards in Cowes and East Cowes; both vessels were launched in 1936. At 39 knots the pair were the fastest destroyers in the world and exceeded all expectations during sea trials in the Solent.

During the construction of Grom and Błyskawica, Polish officers and crew were based in the two towns and a camaraderie developed with local people which was reinforced following the outbreak of war. In August 1939, with the German invasion of Poland imminent, Błyskawica and Grom were ordered out of their home port of Gdynia to fight alongside the Royal Navy.

Sadly, after escorting convoys and taking part in many operations ORP Grom was lost on 4th May 1940 of Narvik, Norway.

In May 1942, ORP Błyskawica was in Cowes for one of her regular refits, and her gallant crew's actions on the night of 4th-5th May will always be remembered when she defended the two towns from a continuous German aerial attack.

According to Admiralty regulations she was supposed to be disarmed when undergoing such a refit. The Admiralty refused a request from warship commander, Captain Wojciech Francki, to keep her armed whilst in dock. Nevertheless the Captain still saw to it that the Ship's ammunition supplies were maintained as well as a combat duty of the crew.

Just before 11pm on 4th May waves of German fighter bombers began an attack on Cowes and her sister town of East Cowes. The planes used a variety of weapons: parachute flares, high explosive bombs and incendiary bombs, augmented by machine guns. ORP Błyskawica quickly became a floating anti-aircraft base in her defence of the towns. Her crew lit smoke canisters in an attempt to obscure the town from its attackers. She was able to use her large calibre guns to force the Luftwaffe to fly higher, affecting the accuracy of its bombing. Further south along the river the Free French Naval units stationed at Marvin's Yard opened up fire with smaller calibre weapons: one French seaman was killed. These first attacks lasted two hours with the ORP Błyskawica's guns firing throughout.The ship's guns became extremely hot and the crew resorted to passing up buckets of river water in an attempt to cool them down. The actions of the Captain and his crew were nevertheless effective and many of the bombs failed to reach their targets. Many of the incendiaries fell harmlessly onto nearby marshland.

Then at about 2am another wave of German aircraft reached the area, subjecting towns to another two hours of bombardment. At dawn on what was now 5th May, emergency services from all over the Island raced in to help, and Polish sailors from ORP Błyskawica joined them, acting as firemen and diggers in support of the local teams.

Over 70 people had lost their lives and many more were injured. Even so, it was widely acknowledged that, but for the actions of the Polish destroyer's Captain and crew on that fateful night the devastation would have been far greater.

The leadership of the commander of the Polish warship, bravery of the Polish sailors and the untiring efforts of the gun crews have entered into history and earned these courageous men the everlasting gratitude of the townspeople of Cowes and East Cowes.

Saturday 30th April - Monday 2nd and Saturday 7th May 2022
10am - 4pm: Exhibition of ORP Blyskawica in East Cowes Town Hall organised by East Cowes Heritage Centre. Open to the public free of charge and includes the exhibition will cover the night of the Blitz (4/5th May 1942) and the parts taken by members of the community who were serving in the Civil Defence.

Wednesday 4th May 2022
7pm: Blitz talk in East Cowes Town Hall organised by East Cowes Heritage Centre. This will include a film based on interviews with survivors of the night 4/5th May and a presentation of the account of a young Air Raid Precaution messenger boy who carried messages around towns while raids were taking place.

Getting there is really easy!

Red Funnel's vehicle ferry arrives in East Cowes from Southampton and you can travel as a foot passenger or take a vehicle. The crossing takes 1 hour and you can see the timetable here.