cinch presents the Isle of Wight Festival 2022! Returning to Seaclose Park in Newport on 16-19 June 2022, with another top line-up!

Get ready to once again start the summer in style with another HUGE line-up including; Lewis Capaldi and Lionel Richie as Friday's headliners, Kasabian and Pete Tong Presents Ibiza Classics as Saturday's headliners, and Sunday's headliner, Muse who will close the festival!

Tickets are on-sale now, and available to purchase at isleofwightfestival.com.

Ferry travel for Isle of Wight Festival 2022 will be available to buy from this page soon.

Please note: Ferry travel for Isle of Wight Festival 2022 will be on sale soon.

Southampton is the gateway to the Isle of Wight Festival and is easy to reach by car, train, coach and plane from anywhere in the UK or Europe.

We operate passenger vehicle ferries from Southampton to East Cowes on the Isle of Wight and Hi-Speed passenger-only services to West Cowes. Whichever route you choose, we very much look forward to welcoming you aboard.

Loading up the car with your best mates and camping gear and heading over to the IW Festival is easy with Red Funnel.

Our vehicle ferries are the largest on the Solent and depart Southampton every hour for 55-60 minute crossing to East Cowes.

There's plenty of time to get something to eat and enjoy a pre-festival beer or two as you cruise down Southampton Water. On arrival, it's a short 10 minute drive to the dedicated festival car park for Red Funnel customers.

It's essential that you pre-book your car, van or motorhome in advance as the ferries will become fully booked.

Booking early ensures you get the best price and your preferred sailing times. Don't forget, our car fares include up to 7 people.

From Southampton you can choose to travel to East Cowes (perfect for campers) or West Cowes (quickest for VIP & non-campers). Our East Cowes service departs every hour and takes 55-60 minutes. Our West Cowes service has departures regularly at peak times and takes 30 minutes. The ticket price is the same and if you wish you can travel out one route and return on the other using the same ticket.

If arriving in Southampton by train or National Express, the Quayconnect bus service connects Southampton Central station with the ferry terminals at Town Quay. It's a 5 minute walk from the coach station to the bus stop at the train station. Quayconnect is free for customers with through rail or coach tickets to East or West Cowes. Leave the bus at Terminal 1 for East Cowes and Terminal 2 for West Cowes.

If arriving at Southampton Airport, you can catch a train from the adjacent station to Southampton Central (10 minutes) - see directions above.

Transport on the Island

For campers, there's also a River Shuttle Service which operates from East and West Cowes to Island Harbour (850 yards from the campsite entrance). The journey by water takes just 20 minutes and return tickets are available to purchase from our Isle of Wight terminals on arrival.

The history of the Isle of Wight Festival dates back to August 1968, where in a cold stubble field near Godshill, a hippie throng gathered for a one day event, which is now a legendary 4 day festival... 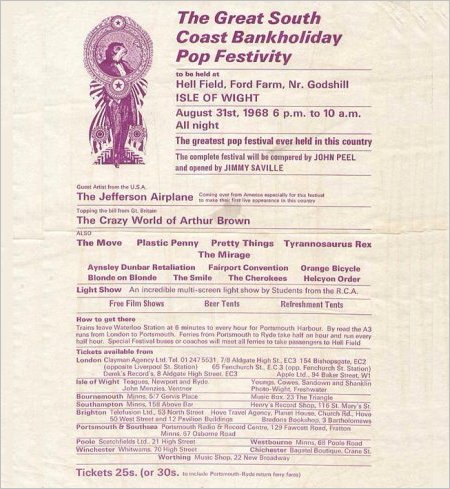 Compared by John Peel, Jefferson Airplane were the only major act on the bill but they were joined by the lesser known Arthur Brown, The Move, Plastic Penny, T-Rex and The Mirage. Tickets could be purchased in advance for just 25 shillings. 10,000 people arrived to see the acts play on a stage constructed from 2 trailers. It’s remembered as a rather primitive event, partly due to a large open sewer. It was however the first great UK rock festival and it sowed the seed for a far bigger event in 1969.

The promoters, Fiery Creations Limited had far more ambitious plans for 1969. Promoter Ray Foulk pestered Bob Dylan for over 6 months to headline the event. Dylan resisted, he was recovering from a serious accident and saw no attraction in performing his come-back show on an unknown island, south of Britain. Foulk took the initiative to appeal to Dylan’s artistic sensibilities and flew to NY with a colour film of the Island, depicting its remarkable natural beauty and literary history.

Dylan was wooed by the idea of performing on Tennyson’s home territory and promptly agreed to headline. The Who, Joe Cocker and Free joined Dylan on a bill which now spanned 2 days. In the days before the festival Dylan stayed at Forelands Farm in Bembridge, the Band rehearsed in the barn…. John Lennon, Yoko Ono, Ringo and Maureen Starr and George and Patti Harrison joined the Dylans. Keith Richards, Bill Wyman, Elton John and Pink Floyd also attended that year to see Dylan play to over 150,000. His set list included: - She Belongs to me, Mr.Tambourine Man, Lay Lady Lay, Like a Rolling Stone, All Along the Watchtower, Blowing in the Wind. 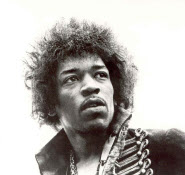 After the massive success of the 69 festival the promoters planned to 'further the dream' for 1970 with a gigantic line up featuring the world’s biggest acts. Jimi Hendrix agreed to perform and with this knowledge other artists clambered to be included. The Who, Joni Mitchell, Miles Davis, Free, Leonard Cohen, Joan Baez, The Moody Blues, ELP to name just a few. Sadly it was to be Hendrix’s last performance, he died a month later.

Incredibly over 600,000 people came to join in this mammoth 5-day music extravaganza that was regarded as Britain’s ‘Woodstock’. Unfortunately, an awful lot more people wanted to get in without buying a ticket and proceeded to break down the perimeter fence and create havoc for police and festival staff. With nearly 1 million rampaging hippies taking over the Island, the authorities decreed enough was enough.

"This is the last festival, it began as a beautiful dream but it has got out of control and it is a monster." Ron Foulk (promoter) September 1st 1970.  In 1970 the ‘Isle of Wight Act’ was passed by Parliament to ban all future festivals. Until 2002...

June 2002 saw the return of the IW Festival after a 32 year absence. The one-day event was held at Seaclose Park on the outskirts of Newport, just over 4 miles from East Cowes and the ferry service to Southampton.

Thousands of music fans came from all over the UK to enjoy the festival’s revival and this was just the start.

John Giddings, the man behind Solo Promotions (the new Promoter) was excited to see so many mainland festivalgoers travelling over to the Island, tracing the footsteps of those who'd made the journey 30 years previously. "Thirty years of hurt never stopped us dreaming - and we dream again, of what 2004 might bring."

Sunny blues skies at Seaclose Park, the rejuvenated festival expanded to 3 days with a line-up that might just have been on everyone's wish list. The Who and David Bowie supported by The Manic Street Preachers, The Charlatans and Steve Harley plus many more, indeed a dream line up and an unforgettable weekend.

Since 2005 the festival has gone from strength to strength with tens of thousands heading across the Solent each June to escape the rat race, chill and enjoy some of the biggest acts around. Faithless, Travis and Michael Stipes REM truly rocked the Island in 2005 and many thought it just couldn't get any better.

The appearance of a reclusive Coldplay the following year, supported by The Prodigy and the Foo Fighters was a real coup and many couldn't believe their luck when the venerable Rolling Stones were confirmed for 2007, supported by Ash and a polished Groove Armada.

Demand for tickets in 2008, 40 years after the original in 68, was massive and the festival was declared a sell out in days. 2008 saw new electronic wrist bands to deter ticket fraud but they certainly didn't deter enthusiasm to see the Kaiser Chiefs, the Sex Pistols (now 30 years since their debut album Never Mind the Bollocks... Here's the Sex Pistols) and The Police.

In 2012 the Isle of Wight hit the headlines around the world for all the wrong reasons. The wettest weather for 100 years made it nigh on impossible for cars to enter the car parks unaided and the Island's roads became gridlocked with traffic building up at even the mainland ferry ports! Once in, a fun time was had by all with epic sets from the likes of Springsteen and Tom Petty.

This year, Isle of Wight Festival is celebrating it's 50th anniversary. Click here to see this years line-up