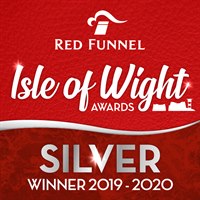 The Blacksmith’s Arms has been a traditional Island pub for more than 400 years. It originally incorporated a blacksmith’s forge that gave the pub its name whilst serving the local farmers using the road between Newport and the West Wight.

On the outside wall is a carved stone plaque illustrating an old Isle of Wight anecdote from those days. It’s based upon a collision between two farm carts more than 100 years ago and of course there’s a moral to the tale. It’s well worth a look

They are proudly a Freehouse and one that is family run. Their food features local seasonal Isle of Wight produce, with seafood being their speciality.

As you would expect from a traditional pub they also keep a great selection of real ales and continental beers as well as an extensive and international wine list.

The large beer garden provides elevated views across an open stretch of the Isle of Wight, with some of the best views. On a clear day it is easy to see across the Solent to the New Forest in Hampshire.

Inside the pub is its original flagstones and open fireplaces, that keep the charm of an old inn with a very welcoming feeling.

The pub welcomes children of all ages and has an impressive kids play area to keep them safely amused.

Walkers and cyclists using the popular Tennyson Trail can take a short detour down to the Blacksmith’s for a well-earned pint or perhaps a pub lunch. The footpath up to the downs is right outside the door.

The building started life as a blacksmith’s forge. According to folklore, it was a smugglers’ tavern in the 1800s. Nearby Betty Haunt Lane is rumoured to be named after Buxom Betty, a smuggler’s daughter, who took up with an excise man. Betraying her smuggler friends, she was then strangled. By the early 20th century, the Blacksmith’s was a coaching house and tearooms. In the 1930s, it became a Mews Brewery pub and later a Whitbread tavern.

The pub has undergone extensive upgrading since the Willis family — Simon, his father, Peter, mother, Josie, and sister, Claire Amos — bought the freehold in 2002.