King Charles I tries to escape from Carisbrooke Castle 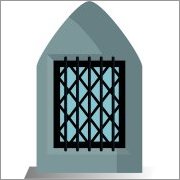 King Charles I arrived at Carisbrooke Castle on the Isle of Wight in November 1647. He had placed himself under the protection of Colonel Robert Hammond, the Parliamentarian governor of the Isle of Wight. But rather than helping him to escape, Hammond became his gaoler.

At first the king was allowed considerable freedom and drove about the island in his coach. In March 1648 Charles made an embarrassing attempt to escape but got stuck between the bars of his bedroom window.

The king left Carisbrooke Castle in September 1648 and was taken to London. A number of radical MPs and army officers decided that he should be charged with high treason. He was tried, found guilty, and executed in Whitehall on 30 January 1649.
Admission tickets to Carisbrooke Castle are available from the Ships Stores onboard or when making a ferry booking online.