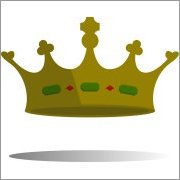 The Island's royal ownership was briefly interrupted during the 15th century when it is said Henry de Beauchamp, Duke of Warwick, was crowned King of the Wight by Henry VI of England.

Henry de Beauchamp, 14th Earl and 1st Duke of Warwick (1425-46) was an English nobleman. A boyhood friend of Henry VI, he was festooned with titles.

The alleged crowning of Henry Beauchamp as King of the Wight was an act that confirmed his status as a favourite of the young English king. The Island's Lordship at the time was actually in the hands of Humphrey, Duke of Gloucester, Henry VI's uncle, and it is thought very unlikely that Henry Beauchamp ever visited the Island.