Presenting the cheque to HIOWAA

After a busy 12 months working with Hampshire & Isle of Wight Air Ambulance, we visited their Thruxton airbase to present them with a cheque for £55,000.

This was the result of our fundraising efforts over 2017 and the generosity of our customers.

Over this time, we took part in a range of fundraising events, which you can read about in our previous blogs here.

Members of the Red Funnel Charity Committee attended to take part in the presenting of the cheque.

"I am always impressed by the creativity and dedication of Red Funnel’s staff, especially our Charity Committee for the work they do to raise money for our Charity of the Year and the many other local charities we support. The Hampshire & Isle of Wight Air Ambulance save lives and we’re delighted that our staff and customers have been able to help keep the service airborne”.

“We’re greatly honoured to have been Red Funnel’s charity of the year for 2017 and the amount of money that has been raised is fantastic. It has been great to work with Red Funnel and I would like to thank everyone for their contribution.” 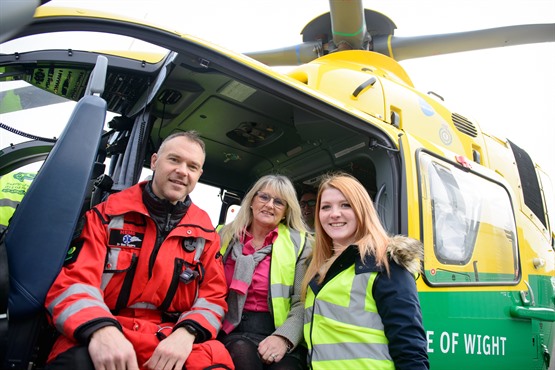 We are now working towards the same target for 2018's Charity of the Year - The Isle of Wight Donkey Sanctuary.