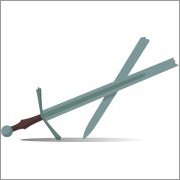 During the Tudor and early Stuart periods there were recurrent threats from France and Spain and the Island was a potential base from which to attack the mainland.

From 1538, Henry VIII built coastal fortresses from Kent to Cornwall, with a cluster around the Solent. On the Island two small forts were built at Cowes using stone from Quarr Abbey and Sandham (Sandown). Yarmouth Castle, along with nearby Sharpnode Blockhouse, was constructed in 1545-47. This was the last and most sophisticated addition to Henry VIII's coastal defences; it was completed after his death in 1547, with the first new-style 'arrowhead' artillery bastion built in England.

The French had landed on the Isle of Wight's eastern coast in 1545, destroying a small fort at Seaview. They also came ashore at Bembridge, St Helens, Sandown, Shanklin and Bonchurch. Both sides lost large numbers of men but after just two days the Island forces secured a famous victory.