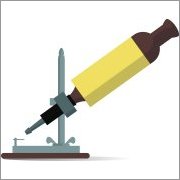 After a long period of obscurity, Robert Hooke is now recognised as one of the most important scientists of his age.

Born in a farmhouse (now demolished) on Hooke Hill, Freshwater in 1635, Hooke was a natural philosopher, architect and polymath interested in mechanics, gravitation, timekeeping, microscopes, palaeontology, astronomy and memory.

In 1660 he discovered the law of elasticity, known as Hooke's Law. Hooke was Surveyor of the City of London and, as chief assistant to the architect Christopher Wren, helped him rebuild London after the Great Fire of 1666. Hooke died in the capital in 1703.

The date stone from Hooke's birthplace was incorporated into the vestry wall of the thatched church of St Agnes, Freshwater Bay, and can be seen from the outside.