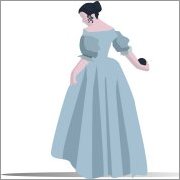 Princess Elizabeth was a daughter of King Charles I. Like her father, she was imprisoned at Carisbrooke Castle.

She died there in 1650 at the age of 14 after developing a chill while playing bowls on the lawn just weeks after her arrival.

She is buried in the chancel of the church of St Thomas in St Thomas's Square, Newport, also known as the Minster. Her monument was commissioned by Queen Victoria when the church was rebuilt in 1854-6. The sculptor was Baron Marochetti and the effigy is white marble. The princess is depicted as a long robed figure, asleep, with her head resting on a Bible.