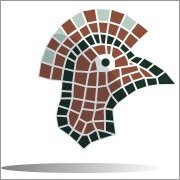 The Romans arrived on the site after AD 43, farming, fishing and tending animals for their meat, milk, hides and wool.

They quarried their own stone and made roof tiles and window glass. They had piped water, bathing rooms and even under-floor heating.

Thought to have first been constructed in the mid-first century, the original small stone farm building at Brading had developed between AD270-300 into an imposing villa with stone and wooden buildings on three sides of a central courtyard or garden. It benefited from a wealth of food and materials including wild boar, sheep, barley and wheat. In the third century, the Villa was severely damaged by fire and subsequently – but slowly - went into decline, partly due to ongoing barbarian raids. The remains of this impressive farm with its mosaics still in their original position can still be seen today.

Admission tickets to Brading Roman Villa are available from the Ships Stores onboard or when making a ferry booking online.