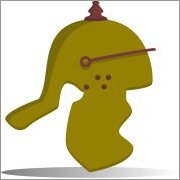 The Isle of Wight was part of the Romans conquest of Britain in AD 43 under the Emperor Claudius.

The Island was taken by the 2nd Legion under the command of Vespasian who was just 34. The most likely landing place was the large expanse of land-locked tidal water later known as Brading Haven (until its 19th century reclamation.) The Celtic population was not in a position to defend the Island against the highly disciplined 5,000-strong 2nd Legion and it is quite possible that Vespasian's 'conquest' was achieved without bloodshed.

Suetonius, Vespasian's biographer, refers to the Island as Vectem or Vecta. From this came the word Vectis, the name used for the Island throughout nearly 400 years of peaceful Roman occupation.