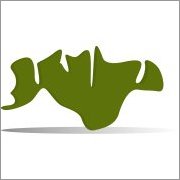 For much of its geological history, recorded in rock formations up to 120 million years old, the Isle of Wight was part of a much greater landmass that was periodically submerged. During the Pleistocene epoch, from 2 million to 10,000 years ago, in cold periods the sea levels fell and the Island became part of mainland Britain which in turn was attached at times to the rest of Europe. In warmer phases the sea rose and the Island broke away.

The earliest human activity in Britain took place during the Pleistocene epoch. The oldest known Isle of Wight site is at Priory Bay, St Helens, where flint hand axes and other implements have been found. These have been dated to 425,000 - 300,000 years ago. During the entire Palaeolithic (Old Stone Age) humans were hunter-gatherers who had a limited impact on the environment.