The Longstone erected at Mottistone 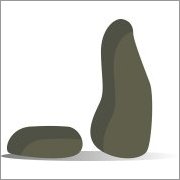 The impressive standing stone on the high ground above Mottistone is the Island's oldest landmark relic of human activity. Dating from the New Stone Age (around 4,000 - 2,400 BC), it was part of a communal burial site called a long barrow.

The Longstone is a giant upright stone but has a smaller stone lying at its base. It has been suggested that the positioning focuses the light of the rising sun into the burial chamber where the spirits of the dead might be awakened by the sun's rays.

The Longstone is one of just three surviving field monuments from the Neolithic period on the Isle of Wight. The others are a mortuary enclosure, where the dead were left exposed until the bones had been picked clean before burial (on Tennyson Down), and a long barrow on Afton Down.