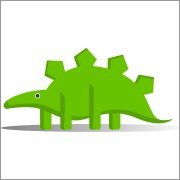 The Isle of Wight has long been renowned as one of Europe's finest sites for dinosaur remains. 125 million years ago there was no island, it was landlocked and part of a large continent. In the muds and silts of ancient marshy environments, animals and plants were trapped and preserved as fossils. These can now be found in the cliffs and on the beaches around the Island's coast.

The oldest rocks are the wealdon clays formed when dinosaurs roamed the earth. The yellow, brown and grey rocks exposed in the bays of Compton, Brook and Brighstone contain fossilised tress and dinosaur bones with several species identified as unique to the Isle of Wight.

Giant casts of dinosaur footprints in stone are a famous feature at Hanover Point. Today, geologists continue to examine the rocks to understand the complex processes which formed the present Isle of Wight. Admission tickets to the Dinosaur Isle museum are available when making a ferry booking.