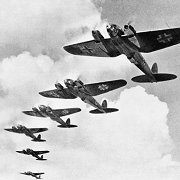 After the fall of France to the Germans, it was clear that the Isle of Wight was vulnerable to attack. Old coastal defences were reactivated, and new ones added.

There were anti-aircraft gun sites, searchlight sites, submarine booms stretched across the Solent, a profusion of 'pill-boxes' and several radar stations.

Much of the Battle of Britain was fought above the Island and many bombs were dropped by German pilots so they could get back to France quicker. RAF Ventnor, the radar station on St Boniface Down, was twice attacked by the Stuka dive-bombers in the summer of 1940, with significant loss of life, while Cowes and East Cowes suffered the worst raid of all in May 1942. A total of 214 civilians were killed.