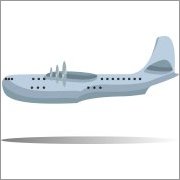 Saunders-Roe was a collaboration between boat builders S E Saunders and the aircraft manufacturers, A V Roe.

In the 20th century the company was the Island's largest employer.

The first seaplane was built in East Cowes in 1913. Large numbers of seaplanes were made for use in the Second World War while giant flying boats were developed for commercial passenger use throughout the world. The Princess, the world's largest metal sea-plane, was constructed in 1952.

Saunders-Roe unveiled SR.N1 the world's first hovercraft in 1959 and later developed several larger designs which could carry passengers including SR.N2 which operated across the Solent.