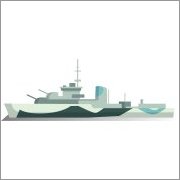 The Blyskawica was the second of two Grom-class destroyers, built for the Polish Navy by J. Samuel White, in Cowes between 1935 and 1937.

The ship was in port for a refit during the Second World War but contrary to Admiralty regulations she was still armed to the teeth.

On the night of the Cowes Blitz in 1942, the Blyskawica fired repeatedly at up to 160 Luftwaffe fighter bombers in two sorties until her guns were so hot they had to be doused with water. The ship also laid down a smokescreen hiding Cowes from sight. Although the town and the shipyard were badly damaged by the German bombers, it is recognised that without the Blyskawica's defensive action, the destruction would have been far worse.