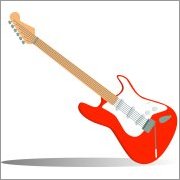 The first, in August 1968 was a one day event held in a stubble field near Godshill where the ley lines met. It featured Arthur Brown, Fairport Convention and Jefferson Airplane and attracted 10,000 hippies. The following year, 100,000 came to see The Who, Joe Cocker, Free and Bob Dylan (watched by The Beatles) at Wootton.

Jimi Hendrix agreed to perform at the third festival in 1970 at Afton Farm in rural West Wight and other artists including The Who, Joni Mitchell, Miles Davis, Free, Leonard Cohen, Joan Baez, The Moody Blues and ELP clamoured to join the bill.

Over 600,000 paid to attend the 5-day extravaganza which was billed as Britain's 'Woodstock'. However, many more arrived without tickets and proceeded to break down the perimeter fence and create havoc for police and security staff. With nearly 1 million rampaging hippies taking over the Island, the Isle of Wight Act was passed to control future large gatherings. Dimbola Museums & Galleries has an exhibition about the Isle of Wight Festivals.

After a 32 year absence, the festival returned in June 2002 and has been a magnet for festivalgoers evey year since.

Tickets are usually on sale between November and June and can be purchased onboard this ship, from ticket offices and online.