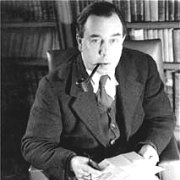 John Boynton Priestley (1894-1984), known as J. B. Priestley, was an English novelist, playwright and broadcaster.

His Yorkshire background is reflected in much of his fiction, particularly in The Good Companions of 1929, his first major success. In 1940, he broadcast a series of short propaganda talks that were credited with saving civilian morale during the Battle of Britain.

His left-wing beliefs brought him into conflict with the government, but influenced the birth of the Welfare State. In 1958 he was a founding member of the Campaign for Nuclear Disarmament.

Priestley lived at Brook Hill House on the brow of a hill above Brook village for eleven years from 1948. Started around 1901 for Sir Charles Seely the large property was not finished until 1916 (a year after Sir Charles died).