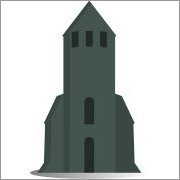 St. Catherine's Oratory was built by Lord of Chale, Walter de Godeton as an act of penance for plundering wine from the wreck of St. Marie of Bayonne which foundered on the treacherous rocks of Atherfield Ledge.

It is the only surviving medieval lighthouse in England.

The 4 story Pepper Pot shaped lighthouse is built from stone and is octagonal on the outside and four-sided on the inside. It was in active use from 1328 until the Dissolution of the Monasteries and had a priest as an oratory to tend to the light and pray for wrecked sailors. An adjacent replacement lighthouse known locally as the "salt cellar" was started in 1785 but was never completed as the site is too frequently shrouded in fog. For this reason the current lighthouse, constructed after the 1837 wreck of the Clarendon, was built much closer to sea level.