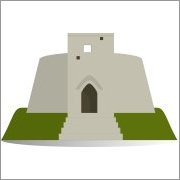 The triumph of William of Normandy over the English King Harold at Hastings in 1066 owed a lot to the military genius of his relative and senior commander at the battle, William FitzOsbern, Grand Seneschal of Normandy.

William the Conqueror made William FitzOsbern Lord of the Isle of Wight. It was a great gift and FitzOsbern governed the Island as a semi-independent feudal state. He replaced Saxon landowners with his own followers, introducing Norman families whose descendants would feature in Island affairs for centuries to come.

William FitzOsbern built a Norman campaign fort at Carisbrooke in a corner of the site of the Saxon burh. He ordered that the tithes and rents from six Island churches (Arreton, Freshwater, Godshill, Newchurch, Niton and Whippingham) should go to Lyre Abbey that he founded in 1045.