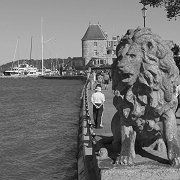 By 1815 Cowes was a noted resort, famed for its saltwater baths, and the annual Pilot Review was a spectacle for the fashionable visitors as the vessels paraded and then raced for money prizes.

In 1814 the visiting yacht owners got together and followed the pilot cutter parade with a parade of yachts – the idea of The Yacht Club was born.

The club was for gentlemen interested in salt-water yachting and the 42 original members agreed to meet for dinner twice a year, in London and in Cowes, to discuss their mutual interest.

The club became The Royal Yacht Club in 1820 after the accession of George IV, who had joined in 1817, and it was renamed The Royal Yacht Squadron by William IV in 1833.