The start of Cowes Week 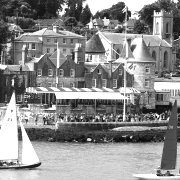 Although the name 'Cowes Week' became attached to the Royal Yacht Squadron Regatta later in the 19th Century it really all began when the Royal Yacht Club, as it then was, introduced organised yacht racing for cups to Cowes Regatta in 1826.

Cowes Regatta itself had been going before the The Yacht Club (its first title) was founded in 1815 and was based around the local Pilot Cutters receiving their licences. Cowes by this time was a noted resort, famed for its saltwater baths, and the annual Pilot Review was a spectacle for the fashionable visitors as the vessels paraded and then raced for money prizes. In 1814 the visiting yacht owners got together and followed the pilot cutter parade with a parade of yachts. It was pilot cutters too who were involved in early Round the Island races – although local boats would always have raced round the Island 'because it's there'.

The Royal Yacht Club placed a notice in the Southampton Town and Country Herald of 31 July 1826 advertising a yacht race for a Gold Cup, value £100, to be held on Thursday 10 August. It was to be open to Club yachts of any rig or tonnage; a £2 entry fee was payable. The race was to start from a cutter in Cowes Roads, stationed off Cowes Castle. The course was to be west round a vessel off Yarmouth, east round the buoy of the Spit off Southsea Castle, round both black buoys on the Middle Bank and round the cutter off Cowes Castle to finish. Vessels on larboard were to give way to those on starboard.

On 11th August the annual Sailing Match, open to vessels of any port, of all description, not exceeding 40 tons and carrying any sails they pleased took place. The course to be 2 – 3 times round the West black buoy of the Middle Bank, off Norris Castle, round the East white buoy of the Brambles and round the cutter off Cowes Castle, i.e. nicely within sight of the visitors. The winner would receive £30, 2nd £20, 3rd £12 and 4th £8, losers £2.

The Regatta Ball was held at the Hotel at East Cowes on the evening of Thursday 10th with a Club Dinner there on Saturday 12th. On the Friday evening, on West Cowes Parade, a great display of fireworks took place from temporary erections in the line of promenade extending in front of the King's House and the residence of the Royal Yacht Club.

The Cowes inhabitants, 'sensible of the pleasure and advantages they derive from their port having become the Rendezvous of the Royal Yacht Club', subscribed for another gold cup to be offered for a race between Club yachts. They raised enough for one of 100 guineas and another of 50 guineas so there was a second regatta on 21 and 22 September 1826 – 11 yachts entered for the first race (yachts of any tonnage) and 12 for the second (which was restricted to vessels under 70 tons); vessels were restricted to mainsail, foresail and jib (with commensurate for yawls, luggers and schooners).

Between all three yacht races in August and September 17 different yachts competed.