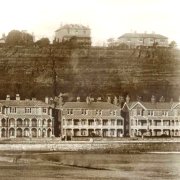 Shanklin was 'discovered' around 1800 by adventurous travellers who were thrilled by its picturesque setting, cliff-bound coastline and gorge-like chine with a waterfall.

The stone-built and thatch-roofed cottages of the Old Village enabled it to develop as a romantic rural-seaside retreat. The first small hotels opened in 1824 and 1833, and villas were increasingly built on choice sites before the railway from Ryde arrived in 1864.

The poet John Keats stayed in the village in 1817 and 1819. The grassy clifftop promenade, Keats Green, is a good place to appreciate Shanklin's setting.

Shanklin Chine is today promoted as 'a magical world of natural beauty.' The gorge is a haven for rare plants, trees and wildlife and has a heritage centre, exhibitions and Victorian tea garden.