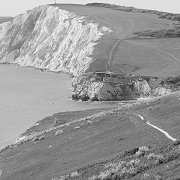 Although renowned for his oil paintings, Turner is also one of the greatest masters of British watercolour landscape painting. He is commonly known as "the painter of light" and his work is regarded as a Romantic preface to Impressionism.

Turner exhibited his first oil painting at the Royal Academy in London in 1796. Fishermen at Sea is a nocturnal moonlit scene of The Needles, or possibly the rocks at Freshwater Bay. The image of boats in peril contrasts the cold light of the moon with the firelight glow of the fishermen's lantern. The picture was praised by contemporary critics and founded Turner's reputation.