First lighthouse built at The Needles 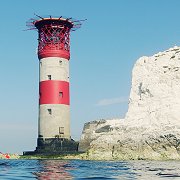 Set in the western approaches to the Island, the Needles form a narrow chalky peninsula which rises from jagged rocks to 120m cliffs.

These rocks have always been a hazard to ships making their way up the Solent to Portsmouth and Southampton Water.

In 1781 merchants and shipowners petitioned Trinity House for a lighthouse. They obtained a patent in January 1782 which directed that lights should be: "kept burning in the nightseason whereby seafaring men and mariners might take notice and avoid danger..... and ships and other vessels of war might safely cruise during the night season in the British Channel".

However, it was not until 1785 that Trinity House erected a lighthouse to the designs of R. Jupp, for 30 years surveyor to the East India Company. The Needles tower was lighted on the 29th September 1786.

As the tower was situated on top of a cliff overhanging Scratchell's Bay, the light which was 144m above sea level was often obscured by sea mists and fogs and was therefore of limited use to mariners.

Admission tickets to The Needles Old Battery and The Needles Landmark are available when making a ferry booking online.