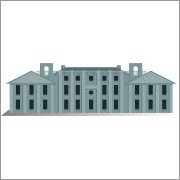 There has been a house on the site of Appuldurcombe since 1300, but the present one was started in 1701.

Now just a shell, it was once the grandest mansion on the Isle of Wight and is still an important example of English Baroque architecture.

Construction on a substantial scale was carried out under Sir Richard Worsley, the 7th baronet, after his return from the Grand Tour of Europe in 1772. In 1782 he left the country for five years and amassed a large collection of Greek antiquities and other works of art for his private museum at Appuldurcombe.

The ruined house is now under the care of English Heritage.