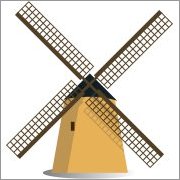 Bembridge Windmill is the only surviving windmill on the Island and was built in the early 1700s when Bembridge was almost an island in its own right, cut off from the rest of the Isle of Wight.

When the artist JMW Turner visited in 1795 he began a watercolour of the windmill showing the sea lapping at the bottom of the hill on which the mill stands.

For two centuries the windmill provided a service for the local community and work for generations of millers. In the 1880s Bembridge's isolation ended when Brading Haven was drained. The arrival of the railway brought cheap flour which meant from 1897 only cattle feed was produced until the mill last operated in 1913. By the following harvest the men had gone off to fight in the Great War and the mill never reopened.

Repairs were made in the 1930s, and then in the late 1950s local people paid for further restoration work before giving the mill to the National Trust in 1961.

Admission tickets are available when making a ferry booking online.