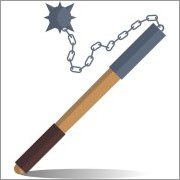 Wulfere, son of Penda, King of Mercia conquered the Isle of Wight in AD 661.

He gave his name to several Island settlements known as Woolverton which means Wulfere's town. Wulfere laid waste to the Island, wresting it from the kingdom of Wessex and handed it to Aldewach, King of Sussex for political reasons.

In AD 686 King Caedwalla wrenched the Island back for Wessex, shortly after killing Aldewach in battle. Caedwalla had converted to Christianity and he was initially intent on murdering all the pagan inhabitants of the Isle of Wight. In the event he handed over just 300 of the Island's 1,200 families to the missionary bishop, Wilfrid of York, who organised their baptism at Brading.