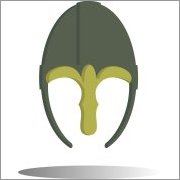 In AD 350 the Island was taken by Cerdic and his son, Cynric, who are said to have slaughtered many Islanders in the Carisbrooke area in order to annex Wight to the sprawling kingdom of Wessex.

These Pagan Anglo-Saxon settlers are thought to have been Jutes, a tribe known to have settled in Kent and southern Hampshire.

A late 5th and 6th century cemetery excavated in the 19th century on Bowcombe Down indicates that settlement there had begun before AD 530.

A Saxon cemetery from the first half of the 6th century has been excavated at Carisbrooke Castle. One of the three graves found was that of an important male, buried with drinking and table vessels, a gold-plated coin and a set of playing-pieces.

Four years after Cerdic's death, rule was divided between his two nephews Stuf and Wihtgar - Wihtgar died in AD 544 and was buried at Carisbrooke.