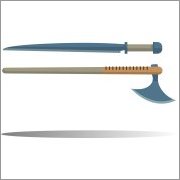 The Isle of Wight is the first recorded place for a Danish attack on England.

It was successfully repelled in AD 787 and for most of the following century the Vikings ignored the Island while they raided the English mainland.

In AD 897, Alfred the Great, King of Wessex, sent his new, fast galleys after six Danish ships attacking England's south coast. The Vikings were roundly defeated at a battle said to have taken place at Brading Haven. The present-day copse, north-west of Brading, and its well, share the name Bloodstone.

From AD 981 onwards the Danes used the Island as a convenient place for launching visits for 'burning and killing' which went on for over 100 years - the Islanders lived in constant fear. Cnut, son of Sweyn, King of the Danes, became King of all England, and visited the Isle of Wight in 1022 'with all his ships.'