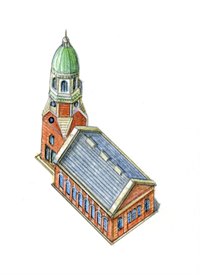 All that now remains of the country's first purpose-built hospital, constructed for the wounded veterans of the Crimean War.

The foundation stone was laid in 1856, by Queen Victoria, the hospital being completed in 1863. The great dome of the Royal Victoria Hospital still survives in good condition, and formally housed the Royal Chapel, seating 900.

Originally a 220 acre site (part of the grounds of the Cistercian Abbey dating back to the 13th century), the hospital was the largest in Britain (with an overall length of more that ¼ mile). One story surrounding the hospital is that it was the subject of a major error in construction, it being intended for India, where another, more suitable to this climate, was built. This may have been part of the reason for the criticism it received from Florence Nightingale, whilst nursing there, who thought the building to be unsuitable.

Vandals set fire to the central block in 1963, and demolition of the main building began in the same year – the last patient being treated in 1979. In May 1980 the site was opened to the public as a country park, and has been a popular location ever since.